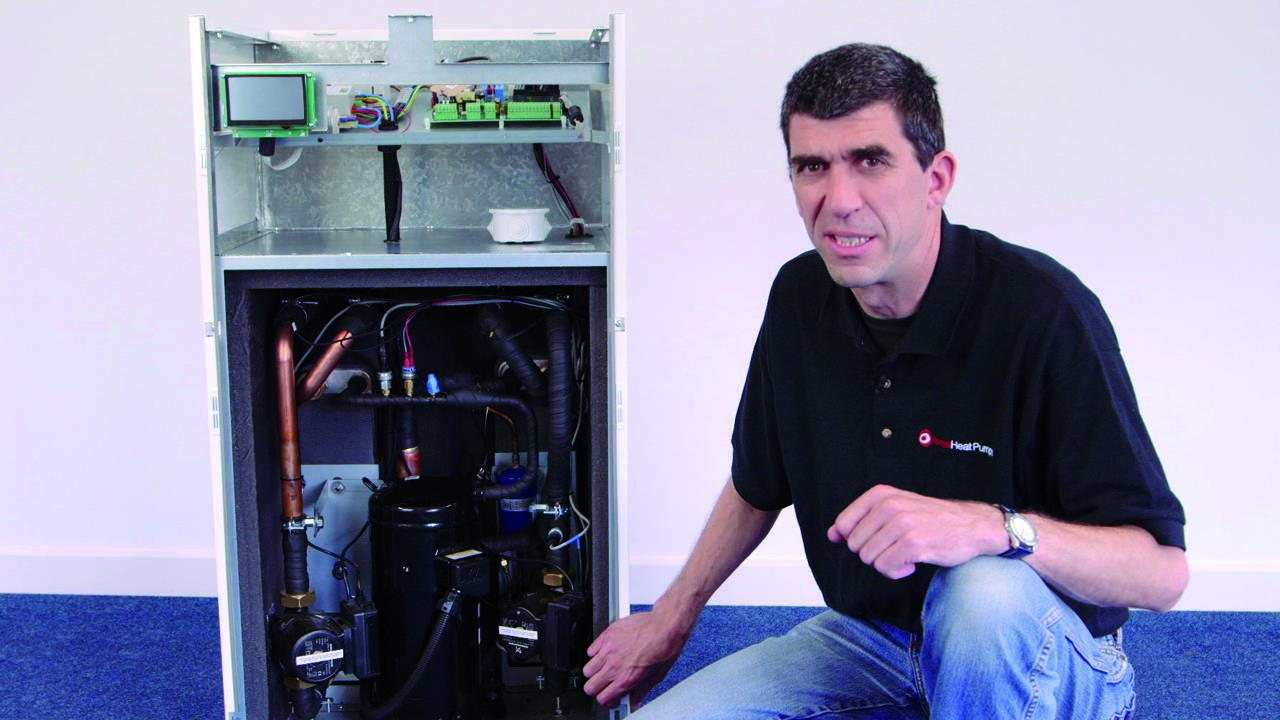 To better understand the benefits of fixed speed compressors over inverter driven controls in ground source heat pumps, you first need to understand the difference between the two.

The compressor component of a ground source heat pump is responsible for upgrading the low grade heat energy extracted from ground or water sources to a higher temperature for use within a building’s heating distribution system.

While all compressors are generally of a scroll-type, inverter driven compressors change speed in response to the load or source temperature experienced by a heat pump unit, whereas fixed speed compressors run at one speed which cannot be altered, and are either on or off.

Armed with this knowledge, let’s examine what we believe are some of the more commonly held misconceptions about inverter driven compressors in ground source heat pump systems, and the demonstrable benefits of fixed speed compressors.

It is true that by altering the speed of the compressor to match demand, an inverter can reduce the amount of electricity used, so they look like an attractive proposition to the energy conscious.

However, this has the effect of making everything else in the system, e.g. water pumps, run for longer, therefore actually increasing electricity consumption.
Due to the way that ErP results are derived, and the fact that inverters can operate at part-load conditions, they can produce better results in test conditions.

Kensa believes that fixed speed compressors may actually be more efficient in the majority of real-life scenarios, and some inverter driven ground source heat pumps less efficient, due to the power losses elsewhere.

Based on the compressor rotations per minute, or speed, an inverter driven compressor has various limits that have to be respected in order to run the system safely. While they are capable of fluctuating their speed according to demand, inverter compressors are still designed to run at, or as close as possible to, one optimum speed.

Any operation away from this speed will limit the maximum output temperature available and also compromise the efficiency. This ‘sweet spot’ of operation speed, typically at about 45% rated output, means that it is imperative that the inverter compressor is sized correctly for the heat demand – a ‘catch all’ approach does not work efficiently.

Fixed speed compressors are optimised for the best efficiency at the speed they are fixed to run. Therefore, if your ground source heat pump is sized to operate at a maximum output for the majority of its life, a fixed speed compressor will almost certainly prove more efficient that an inverter at 100% operation.

Inverters of all types are well known for their reliability issues and have a relatively short working life. A ground source heat pump designed to last 25 years will typically need two replacement inverters in that time; the cost of these alone is likely to far exceed any savings made in running costs, based on efficiency projections.

Availability of compatible replacement inverters is also questionable over this time period, as electronics of this type are typically only available for around eight years.

Generally the speed of variation is controlled by further sophisticated and expensive electronics and, while these are becoming more robust, they often have a short life compared to fixed speed compressors.

They are also vulnerable to damage from voltage spikes and nearby lightning that would not damage a fixed speed unit.

Currently, almost all heat pump compressors designed for use with an inverter are only compatible with R410A refrigerant. This refrigerant has a significantly higher Global Warming Potential (GWP) than the R134a and R407C that Kensa uses, and R410A is already being viewed as ‘obsolete’ by many in the industry because of this.

Quite apart from the environmental considerations due to high GWP, future availability of this refrigerant for service is questionable. R410A also operates at very high pressures, approximately double the pressure of R134a. This causes high levels of stress on components potentially leading to reduced reliability in heat pumps using this type of refrigerant.

R410A also has a more limited maximum hot water temperature, which can cause issues with DHW system; a typical R410A system will be limited to about 10°c less than an R134a system.