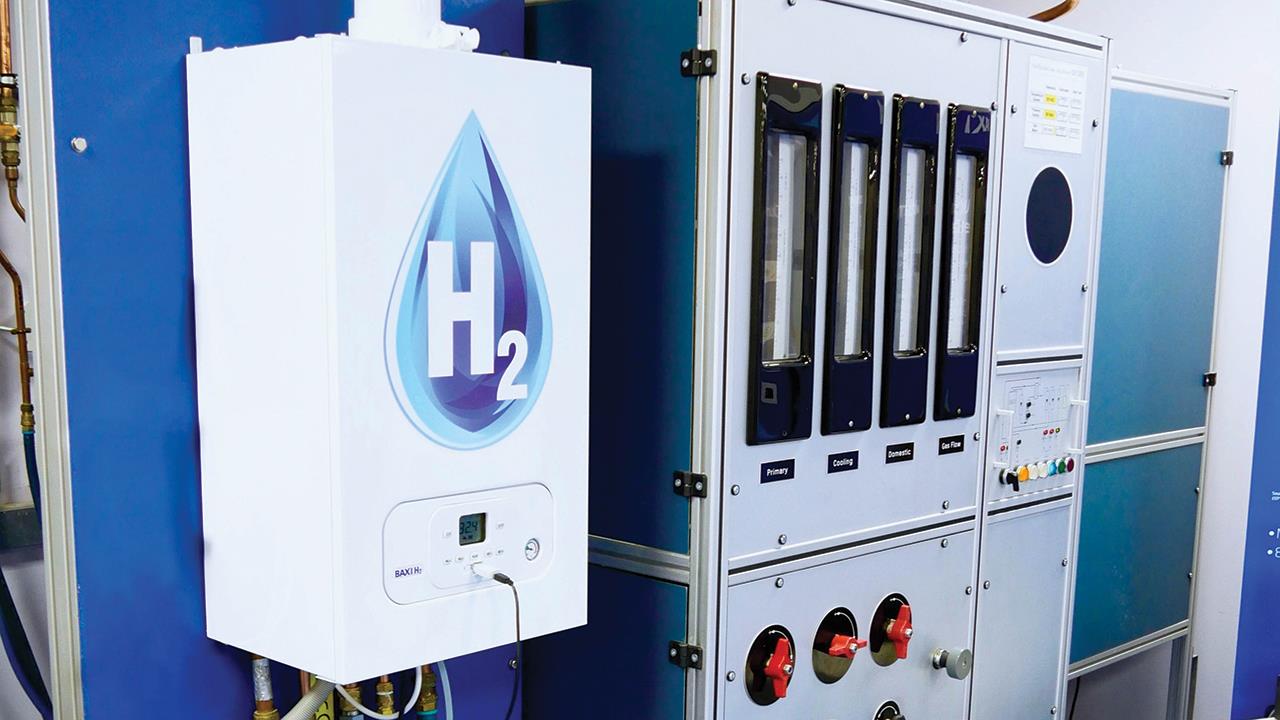 Following the unveiling of its 100% hydrogen boiler, HVP Editor Joe Dart speaks to Baxi about what impact the introduction of hydrogen boilers will have on installers.

With the UK government committing to a target of net-zero carbon emissions by 2050 last year, the topic of the future of heat has been thrust firmly into the spotlight. According to the Department for Business, Energy & Industrial Strategy (BEIS), heating accounts for 37% of all emissions, which makes it one of the most obvious areas to target in order to reduce the UK’s overall carbon footprint.

Moving away from fossil fuels such as oil and gas is a part of that journey towards net-zero, and many in the industry are starting to bang the drum for hydrogen as the primary solution. The first hydrogen boilers are starting to roll off the production line, but many installers may still be in the dark when it comes to what the everyday impact of this technology will be.

HVP was recently invited to Baxi Heating’s production facilities in Preston to observe the company’s first boiler 100% fuelled by hydrogen. We also had the opportunity to speak to Jeff House, Head of External Affairs at Baxi Heating, about what impact the introduction of hydrogen boilers will have on the installer community.

Despite Baxi first exploring the idea of utilising hydrogen to fire its boilers just two years ago, government funding from BEIS through the Hy4Heat programme has allowed the company ramp up work in the field, resulting in the creation of its first 100% hydrogen boiler.

But, with hydrogen opening up a world of possibilities, what was the philosophy behind the development of Baxi’s first hydrogen boiler? Jeff explained: “The whole hydrogen debate in the UK is predicated around decarbonisation of existing homes.

“So, the design intent and goal for us was always to have something directly comparable to today’s natural gas boilers – in terms of physical fit, size, look, feel, and aesthetic, and also operation to an extent – to make it the easiest potential like-for-like changeover we could.”

The creation of a product in-line with existing gas boilers should be a relief for many installers, who may not welcome having to learn how to install a system which is completely alien to their existing skills. However, there are subtle changes that tradespeople will have to get to grips with. Jeff says that, in terms of similarities to gas boilers, “the hydraulics, the hot and cold water, and the heating circuits are all the same in terms of the process that you’d follow”, but the only real differentiator will be the “safety procedures around hydrogen”.

With hydrogen still in its infancy as a technology, those safety procedures are still a work in progress, Jeff reminds us. One of the major safety questions yet to be answered is around improving the visibility of the flame – compared with natural gas, hydrogen burns with a much paler flame, barely visible in daylight. In addition, as hydrogen is odourless and more prone to leakage than natural gas, so suitable odorants will have to be added to aid detection. Standardised solutions for both will need to be developed before the technology can be utilised on a wide scale.

At this stage, it is also unclear what qualifications an installer will need in order to install a hydrogen boiler. Jeff theorises that the Gas Safe Register will continue to play a role, but thinks hydrogen could form an extra ACS module for installers to complete before becoming qualified.

So, when are installers going to be able to get their hands on a hydrogen boiler? It will be a ways off for most, according to Jeff.

“In terms of jumping in and getting a hold of one, there are a few projects happening in the next couple of years in terms of demonstrations. These will be fairly small numbers that are likely to be tightly controlled by the project leaders, and it’s generally gas networks in the specific [test] areas that would lead the project,” he explained.

“So, we’re a few years away yet from the installer population getting hold of one of these things and having to do anything with it outside of what you would do with a natural gas boiler.”

Although 100% hydrogen boilers are at least several years away, what could be in your hands sooner than you think are ‘hydrogen-ready’ boilers. These boilers run on natural gas but can be switched over to hydrogen at a later date.

Jeff explained: “Ourselves and [Worcester] Bosch are pushing this idea that you have a boiler that works on methane today and then you can convert it to hydrogen at some point in the future. In which case, the installation will be exactly the same as a natural gas boiler, with the same standards, framework, certification, and safety procedures that you have today.”

A ‘switchover kit’ would be required to change the boiler from natural gas to hydrogen, Jeff says. This kit would include a small number of components, but unfortunately Baxi isn’t able to reveal the specifics of what those components are at this stage. However, what’s encouraging is that the switchover process appears to be relatively simple for a trained gas engineer.

Jeff said: “It would be case of isolating the appliance; you’d change over a couple of bits and recommission. From some of the work we’ve done internally, we think that process is certainly going to be less than an hour, and it might be as quick as 30 minutes.”

In terms of next steps for hydrogen gas, a number of hydrogen pilots are either planned or already underway across the UK. For instance, Keele University’s private gas grid is currently being used to host a 10-month live demonstration to establish the potential of blending up to 20% hydrogen into the normal gas supply. This particular project doesn’t require the use of hydrogen boilers, as existing boilers can continue to operate with this level of hydrogen.

SGN’s H100 project, on the other hand, is looking to construct and demonstrate the UK’s first 100% hydrogen network, which will span 300 homes and businesses.

“All of this will, in effect, dovetail into the portfolio of evidence for government,” explained Jeff. “At some point in the next five years we expect a government decision on the future of the gas grid.”

He added: “Pure hydrogen’s obviously chicken and egg around when we get hydrogen through the network. So, the idea is to get hydrogen-ready stuff out there as soon as we can.”

Baxi is currently developing a portfolio of hydrogen-ready combi and system boilers, with outputs going up to 40kW on the combi variant, Jeff explains. “The effective work at the moment is to look at the whole spread of outputs we have across, predominantly, the residential range to make sure we’ve got an offering that is hydrogen-ready and suits all the use cases.”

There are still issues to iron out before hydrogen arrives but, once it does, Jeff says Baxi will be on hand to help make the process as painless as possible for installers.

He concluded: “We’ll do everything we can to help with training as well, and we already have a really active presence in the training sector. When we launch a new product, we offer training on it, so there are plans to offer hydrogen training as and when we get the clarity we need to be able to deliver it.