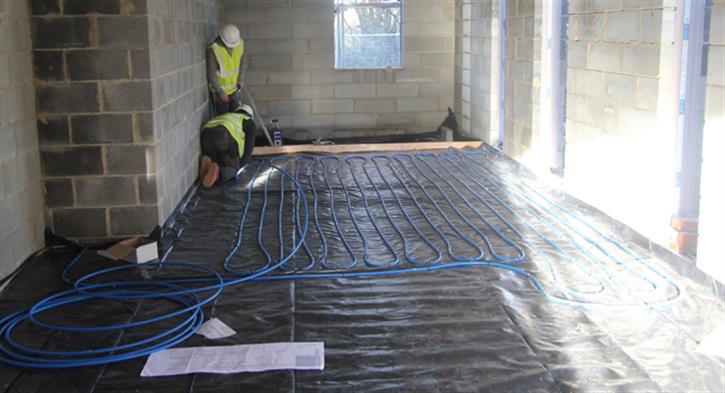 A Royal Marine who contracted a chronic illness while serving in Afghanistan is benefiting from the generosity of a number of building product manufacturers contributing to a purpose-built house for him and his family.

Corporal Phil Eaglesham contracted the relatively rare Q fever while serving in Afghanistan five years ago. The condition has left him unable to walk and is unfortunately proving to be degenerative, making his existing home near Taunton increasingly unsuitable.

The Royal Marines Charity appealed for help to construct a bespoke dwelling to meet his specific needs.

Exeter based renewables and underfloor heating specialist, OMNIE, has donated one of its Staples pipework systems for the construction of a fully wheelchair accessible home.

The 600 metres of underfloor heating pipe and made-to-measure manifold will work to keep the entire ground floor of the two-storey property at a carefully controlled temperature.

Sharky Ward, deputy chief executive officer of The Royal Marines Charity, extended his thanks to Persimmon Homes, who donated the land near Taunton, Haldons Chartered Surveyors, who are project managing the build, and Grainge Architects, who developed the plans, all free of charge.

“Omnie have played key role and very kindly donated the underfloor heating system, which will help provide a consistent temperature, which is critical to Corporal Eaglesham’s needs,” he added. “We are hugely grateful to everyone who has made this dream become a reality.”

The layout of the property has created a totally wheelchair friendly environment across both floors, linked by a lift.

As well as the integral garage, the downstairs contains a master bedroom suite with shower room, while the linked kitchen, dining and living rooms feature folding doors, which open out onto the rear garden.

These areas, together with a lobby and separate cloakroom, are heated by six pipe circuits connected back to the five-port manifold and controlled by programmable room thermostats. Designed to create room temperatures of 19, 21 and 22 centigrade, the pipe layouts were securely clipped down over thermal insulation before a wet screed was laid to provide good heat transference.

Corporal Eaglesham said: “This house gives us the chance to make a life and a future again. Even as my condition deteriorates we can still get on with our lives to the best of our ability, rather than fire-fighting every issue that comes with every little change in my condition. The independence which the house layout gives me is second to none.”