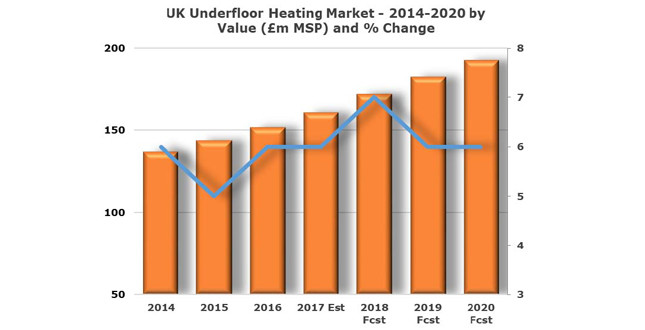 AMA Research has released new research which predicts that the underfloor heating (UFH) market will experience a 7% rise this year.

According the report, the UFH market has performed well over the last few years, driven by good levels of commercial and domestic construction and RMI, and now accounts for almost 7% of the total UK heating systems sector. More recent growth can also be attributed to rising energy prices and concerns over fuel bills, and the fact that UFH is now seen as a more affordable mainstream heating option. In 2017, the market grew by 6%, with similar growth forecast for 2018.

The domestic sector accounts for almost two-thirds of the overall UFH market value, and includes newbuild activity by housebuilders, the self-build market and RMI/DIY retrofit projects in residential homes. Non-domestic applications account for the remainder. Although large-scale health and education projects represent the most significant non-domestic end-user markets, opportunities are arising in the care home, industrial, warehousing, leisure and entertainment, commercial office, and retail sectors.

Water-based underfloor heating makes up the largest share by value, compared to electric systems. The supply structure is dominated by direct supply, with some manufacturers and other specialists offering a ‘supply and fit’ service. Elsewhere, UFH systems increasingly form a core component of the product ranges of companies such as tile manufacturers and kitchen and bathroom specialists. DIY multiples and merchants also continue to play a major role. Much of the recent growth in the market has come from online retailers, the number of which continues to expand.

Factors that influence demand for underfloor heating include housebuilding activity, which is expected to continue at a steady pace, as demand for new and affordable housing is likely to remain a major political issue. The conversion of commercial office spaces into multi-residential flats and apartments, particularly in areas of high population density, should create additional opportunities for UFH, as they are likely to be smaller in size and high-spec.

Ease of installation continues to be an important consideration within construction, given the ongoing skills shortages and a need to reduce both build time and cost. This is expected to contribute towards further growth in modular build/off-site construction, which should benefit the UFH market. Retrofit activity in both the domestic and commercial sectors are also expected to see steady growth.

In addition, the commitment towards further development of the renewable energy sector and sustainable homes should continue, irrespective of whether the government meets its 2020 targets, and this is likely to favour adoption of UFH. Growth will also be driven by product development focused on flexibility and maximising individual control of systems, which is likely to increase the efficiency of UFH systems further, and the increasing uptake of intelligent technology.

“Although the market value has increased by almost 25% since 2013, there remains significant scope for growth in this sector,” said Keith Taylor, Director of AMA Research.

“The level of installations remains low compared with European countries such as Germany and the Nordic nations. Penetration is forecast to continue to grow with demand driven by concerns over volatile energy bills, ongoing running costs of systems and maximising comfort, and the fact that underfloor heating is becoming a more mainstream product.”