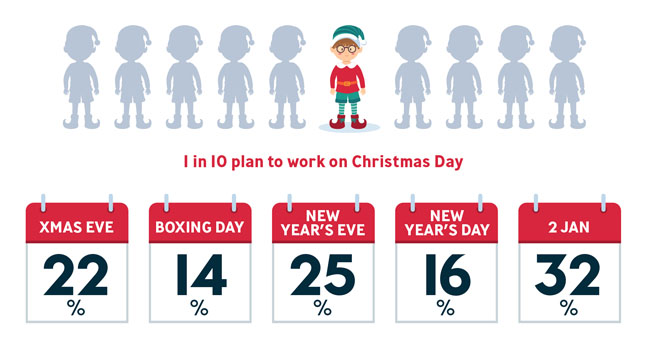 Heating and plumbing engineers are the unsung heroes of the festive season, according to a new survey, barely downing tools to take a break over the traditional Christmas and New Year holiday.

One in 10 plan to work on Christmas Day while one in four say they’re ready to abandon their turkey dinner and the Queen’s speech for an emergency call.

Over half (56%) say they’ve rescued a customer’s Christmas Day by attending an emergency call out and fixing a problem.

According to the research, commissioned by Plumb Center, working in partnership with the Chartered Institute of Heating & Plumbing Engineering (CIPHE), the number of those planning to work on other key dates are similarly high: 22% say they’ll be working on Christmas Eve, 14% plan to do so on Boxing Day, a quarter on New Year’s Eve and 16% on New Year’s Day. Incredibly nearly one in three (32%) heating and plumbing installers will be back on the tools on Monday 2nd January, despite it being a Bank Holiday.

Homeowners are advised to make friends with their local installer now if they expect to need help over the festive period: of those engineers providing emergency cover, 69% say it’s only for friends, family and known customers.

This work ethic comes at a price for many in the trade. Over a third say they’ve missed an important personal Christmas event due to work. Of these, 42% have foregone a social gathering, 39% missed a family gathering, and one in five (19%) have missed an event involving their children.

But as if the gift of time is not enough, it seems that heating and plumbing engineers just can’t stop giving at Christmas. Of those who’ve responded to a call out during the holiday period in the past, 30% say they did the job for free, while 21% gave a festive discount.

In fact, it’s wonderful to learn that just 18% charge a higher-than-normal call out rate over the Christmas period.

The research also shows that it’s burst water pipes and broken boilers leading the ‘emergency jobs at Christmas’ league table, with 26% and 25% of installers respectively citing this as the reason for a call for help. Other reasons given for an emergency visit were heating system problems (20%), plumbing problems (19%) and blocked pipes (10%).

Frustratingly however, it seems that a homeowner’s definition of an emergency can be wide of the mark: 47% of engineers responding to a call-out at this time of year say that, upon arriving, the job was not a genuine emergency. An alarming eight out of 10 report that botched work is the cause of the problem they’ve been called to address.

Gary Hitchens, customer service director at Plumb Center, comments: “We know from the demand we experience in our branch network that while the rest of the nation downs tools to tuck into a mince pie and mulled wine, many installers and plumbers soldier on over the Christmas break. But to learn that one in four are ready to drop everything and respond to a call on Christmas Day is awe-inspiring, and that’s before we learn that half have discounted their fee or even worked for free over the festive season!”

Kevin Wellman, chief executive officer of the CIPHE, adds: “Heating and plumbing engineers are the unsung heroes of the festive season and they richly deserve the spotlight this survey shines on them. Every planned or responsive job is important, but at this time of year, when emotions run high, the pressure is really on to deliver the goods, so there should be great pride that so many can say they’ve ‘saved a Christmas Day’.

“What’s worrying however is the number of jobs that are apparently the consequence of botched work. A job done by a professional in the first place would prevent much of this seasonal heartache, so our collective 2017 resolution must be to drive this message home. We wish everyone involved in the fantastic industry a very Merry Christmas and a prosperous New Year.”