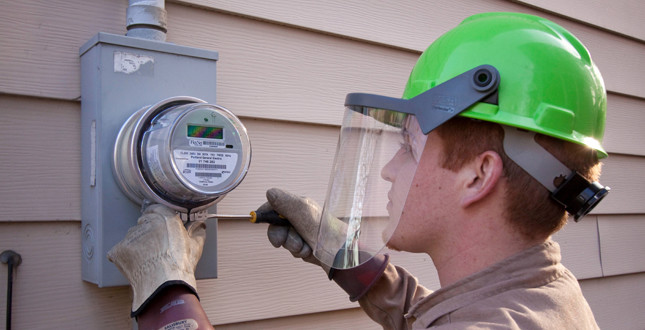 There is a war waging in British homes, according to Smart Energy GB’s TV adverts. The misadventures of Gaz and Leccy have been showing the nation how little control we have over our energy use. Between now and 2020 Smart Energy GB is making a push to upgrade the country to smart meters to save homeowners money and reduce carbon emissions.

The introduction of smart meters across the UK is one of the biggest changes to the utility infrastructure the country has ever seen. According to Smart Energy GB, the voice of the smart meter roll out, over 3.5 million smart meter devices have already been fitted. This means that there are a lot of people already starting to see the benefits, thanks to Gaz and Leccy’s hard work.

Smart Energy GB has said: “Research found that 80% of those who already have a smart meter have taken at least one step to change something about their energy use.”

These steps include changing the way household appliances are used, turning off lights and turning down heating.

MCL Utility works closely with housebuilders, landlords and utilities companies to understand their needs in terms of meter boxes. This means that we are uniquely placed to see how gas and electricity providers are using smart meters as part of the solution to Britain’s energy crisis. We are a nation that is still dangerously reliant on fossil fuels, and renewable energy sources are not reliable enough yet to fulfil our energy needs. This is why the government is introducing the smart grid.

The smart grid will be more efficient, greener and more reliable. In addition, we will be able to reduce waste energy and plan where we need new power stations or when and how renewable energy is most useful to meet consumer demand.

This demand is only going to increase, especially with the government’s target to build one million new homes by the end of its term to meet housing demand, which will see in 200,000 new homes built each year. The strain these additional homes will put on the gas and electricity infrastructure means that it is more important than ever to give consumers and service providers as many tools as possible to take control of usage.

Despite this, some are concerned that consumer savings will not offset the cost of implementation. In countries that have already adopted smart meters, there has been varied success. For example, an auditors-general report in Victoria, Australia showed that there had been little benefit for end users after the government invested almost $2 billion in smart meter roll out.

Smart Energy GB and utility providers are working to maximise potential offsetting costs of the smart meter system in the UK by providing information and training to consumers on the benefits of its use and capabilities. Through Smart Energy GB’s mischievous television advert characters, Gaz and Leccy, and across a range of print and electronic communications, consumers are being shown how smart meters will put them in complete control of their utility bills. By using a smart meter, customers will be able to monitor and manage their usage using real-time data among other benefits such as the opportunity to set-up automatic and flexible top up payments.

Consumers who have smart meter devices installed are already reporting the benefits, with 84% of customers feeling they have a better idea of what their energy costs are and seven in ten customers have reported to Smart Energy GB that they are more conscious of the energy that they are using. In addition, 50% of smart meter users say that the device is already helping them save money.

It’s time to stop battling with Gaz and Leccy and to take control of our energy. So, it’s time to give your meter boxes a new lease of life with a smart meter and save yourself some money — not to mention doing your bit to reduce carbon emissions.