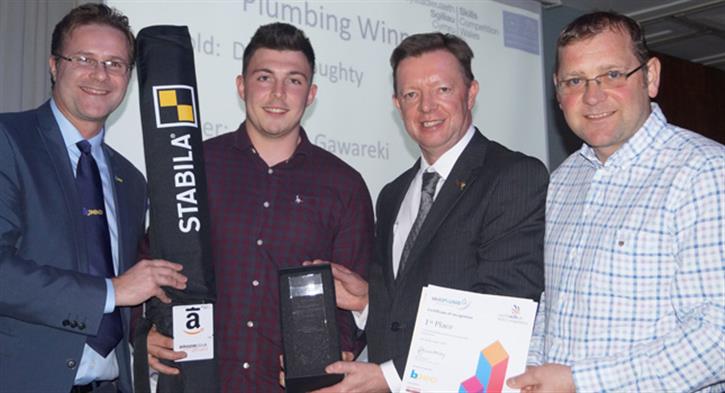 As the search for apprentice plumber of the year continues, 21 year-old Daniel Doughty has been named best in Wales at the first SkillPLUMB heat of 2015.

Daniel, a student at the Coleg Sir Gar, was up against seven other competitors to win the title, and advance to the SkillPLUMB UK final in November at the Skills Show at the Birmingham NEC.

Judges scored Daniel most highly in a task that involved the installation of copper pipework, including various jointing techniques and complex pipe bending. All work had to be completed to an extremely high standard and marked against tough criteria including bend and joint quality, angles and clearance, and task layout and pipework soundness.

Second place at the event was awarded to Mariusz Gawareki of Gower College Swansea, with third place slot going to Tina Spencer of Coleg Cambria.

“It’s been a really challenging day but it’s such a reward to be named the winner at the end of it!” said Daniel. “Working to such a high standard within a tight timescale meant I really had to focus, but I think it’s really improved my skills. It’s an honour to represent Wales in this way and I’m proud to have won.”

SkillPLUMB is an annual skills competition designed to promote standards and skills across the plumbing industry, developing competence into excellence. Three further heats will take place across England during May and June.

SkillPLUMB is organised by BPEC and is sponsored by Copper Initiative. To find out more about the competition visit http://bpec.org.uk/the-bpec-charity