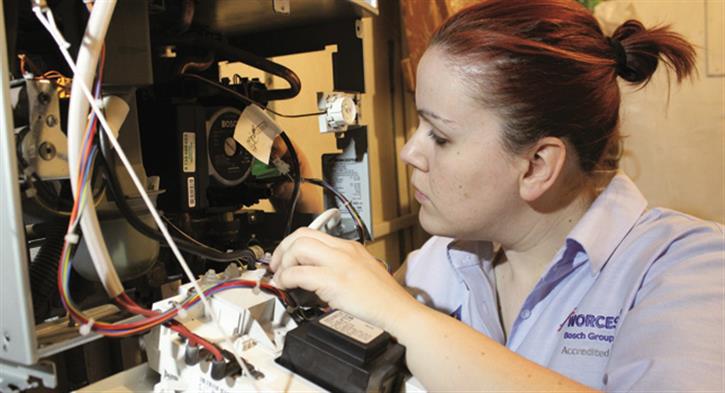 HVP speaks to JTL about the options for businesses wanting to take on an apprentice, but who are put off by the levels of red tape.

With rising concerns over skills shortages, and the government trying to encourage more young people into apprenticeships, it’s more important than ever to engage businesses of all shapes and sizes in training up the next generation of plumbing and heating engineers.

However, the number of young people who completed a plumbing or heating qualification between 2013 and 2014 was only 4,500, according to figures from qualification provider City & Guilds.

Many of those undertaking plumbing apprenticeships have expressed the difficulty they had in finding a company that would take them on. In HVP’s own surveys, readers have expressed a reluctance to employ an apprentice due to the cost in both time and money to the business.

And yet, who in the industry currently got to where they are without first completing on the job training?

Who is going to bring in new blood and teach these young people what it’s like to work in the real world and not just the classroom if we aren’t prepared to do it?

There are numerous colleges across the UK that offer plumbing qualifications. Many of these have links with local businesses that take on apprentices, and some apprentices may even apply for positions directly.

However, this often leaves the business holding all the responsibility when it comes to funding applications, progress assessment and ongoing paperwork. In some instances, businesses are also concerned with the quality of the candidates, and the risk of hiring someone who might not be fully committed to learning.

Training provider and charity JTL aims to relieve that burden by taking care of the paperwork, offering a financial support package, and properly assessing each candidate before they start.

Initially set up in 1990, the Electrical Contractors’ Association and the forerunner to Unite the union came together to form JTL – a new organisation to manage training in the electrical sector.

Working with approximately 3,600 businesses and supporting over 6,000 young people each year, JTL helps those aged 16 and over gain a nationally recognised qualification, build knowledge and skills on the job, and earn while they learn.

JTL is strict with its intake, however, only accepting the best applicants. Each year, 80% of these apprentices achieve their qualifications compared with the national average of 60% for work-based learning.

The programme trains young people in the skills, knowledge and best industry practice they need to succeed. At college they get knowledge-based element training and earn their Functional (Essential) Skills. On site, they work towards their NVQ – in a way that will benefit the company.

Apprentices who qualify gain NVQ Level 2 or 3 in their field, the equivalent of two A-levels. Both the industry and government will recognise the apprentice as fully qualified in the trade.

After passing the initial assessment, apprentices are added to JTL’s approved applicant list and can start looking for an employer.

Once they have obtained a position, each apprentice is assigned a training officer who oversees everything from liaising with the college, to mentoring the apprentice and assessing their progress. All training officers have previous experience in the industry, whether simply working on the tools or having run their own business, so they have a full understanding of all sides of the coin.

Mark Brown, training officer for the London team, started out as a plumbing apprentice in 1983, just two days after leaving school. He worked on both commercial and domestic projects until 2005, when he joined JTL.

In basic terms, he described his role as supporting both the learner and company throughout the apprenticeship.

Before the apprentice starts work, Mr Brown visits each business to explain how the apprenticeship works and what is expected from the company. He also makes sure health and safety processes are up to scratch, and establishes that the business is able to properly support the apprentice.

He will continue to meet with the business and be in contact via phone and email to walk them through the process, identifying the areas the learner needs to be trained in and offering advice.

As companies specialise in different sectors of the industry, Mr Brown makes sure the goals and assessments of the apprentice are worked around the company’s business needs.

“Although each apprentice has to achieve the same level of competence, they are treated individually and a specific plan on how to collect NVQ evidence is assessed throughout the year,” Mr Brown explained.

“We give feedback to the company on the apprentice’s progress both in college and on site, and plan with them to guide the learner through the City & Guild requirements of their portfolio.”

Having helped train three apprentices while working as a plumber, Mr Brown understands that each learner will evolve at a different speed and the aim is to get him or her to the same level of ability and understanding of the craft.

“I try to impart this to site supervisors and mentors and let them know what is required of the learner and allow them to train at a suitable pace,” he said.

“One of the most rewarding aspects of my job is that moment when the penny drops, and learners who may have struggled earlier in the year start producing work to a higher standard and gain a better understanding of the craft.”

The key benefit for businesses in working with JTL is that both the learner and the company have a dedicated person to guide them through the two to four years of the apprenticeship, said Mr Brown.

“Each learner and company gets tailored and specific guidance. It’s not one size fits all in a class of 20 for example,” he explained.

JTL also has internal Health & Safety, Equality & Diversity and Internal Verification departments that can advise the company throughout.

While JTL works to make the process as simple as possible for all involved, businesses do need to understand the implications of taking on an apprentice.

“It will take a bit of time, and personal productivity may decline in the short term, but apprentices can be a real practical and financial asset to the company going forward,” explained Richard Allen, marketing manager at JTL.

JTL works hard to match apprentices with suitable companies, and to help the apprentice progress in his or her role over the two or three years in which they study. However, the business also needs to make an effort to develop that young person, and integrate them as part of the team.

JTL estimates that after completing an apprenticeship with a company, a student is likely to stay on for another three years. There is an onus on the business to make that person feel valued and offer opportunities within the company if they want them to stick around.

“It is better to have a good person for a short time than to not have them at all,” Mr Allen concluded.

To find out more about the JTL apprentice scheme, please visit: www.jtltraining.com.