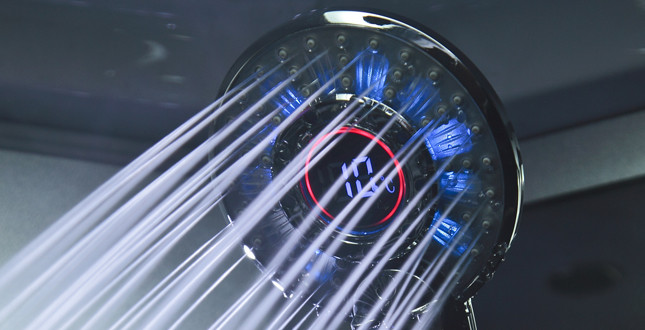 The NHS sees more than 300 people* a year admitted to their specialist burns service for severe scalds from hot water in their shower, bath or sink. More than two thirds of these are children.

It is estimated that a further 1,600 people are seen by UK emergency departments for lesser burns.

Insignia, a UK brand for luxury steam and hydro massage showers has launched a digital shower head, powered by dynamo technology. The digital shower measures the temperature of the water and displays it through a digital read out and coloured safety lights, giving exact control of the heat of the water. The dynamo technology means the digital read outs and lights are all simply powered by your own water pressure.

Leon Maclean, MD at Insignia said: “The digital shower head is designed to give greater control and awareness over the temperature of the water you’re using. For parents it obviously gives them greater peace of mind on how hot the water is for children and in general will lower the risk of scalding in the bathroom.

“The product isn’t just about scald prevention though, it’s simply about giving greater control on the temperature your showering at. The fact is, showers which are too hot aren’t good for your skin health anyway.”

According to Leon the ideal shower temperature shouldn’t be any warmer than your skin, so around 34 to 37 degrees. Any hotter and the heat can strip the skin's oil barrier meaning the moisture in your skin easily escapes, leading to dry and itchy skin. The hotter the shower and the longer you spend in the shower, the more moisture you’re likely to lose.