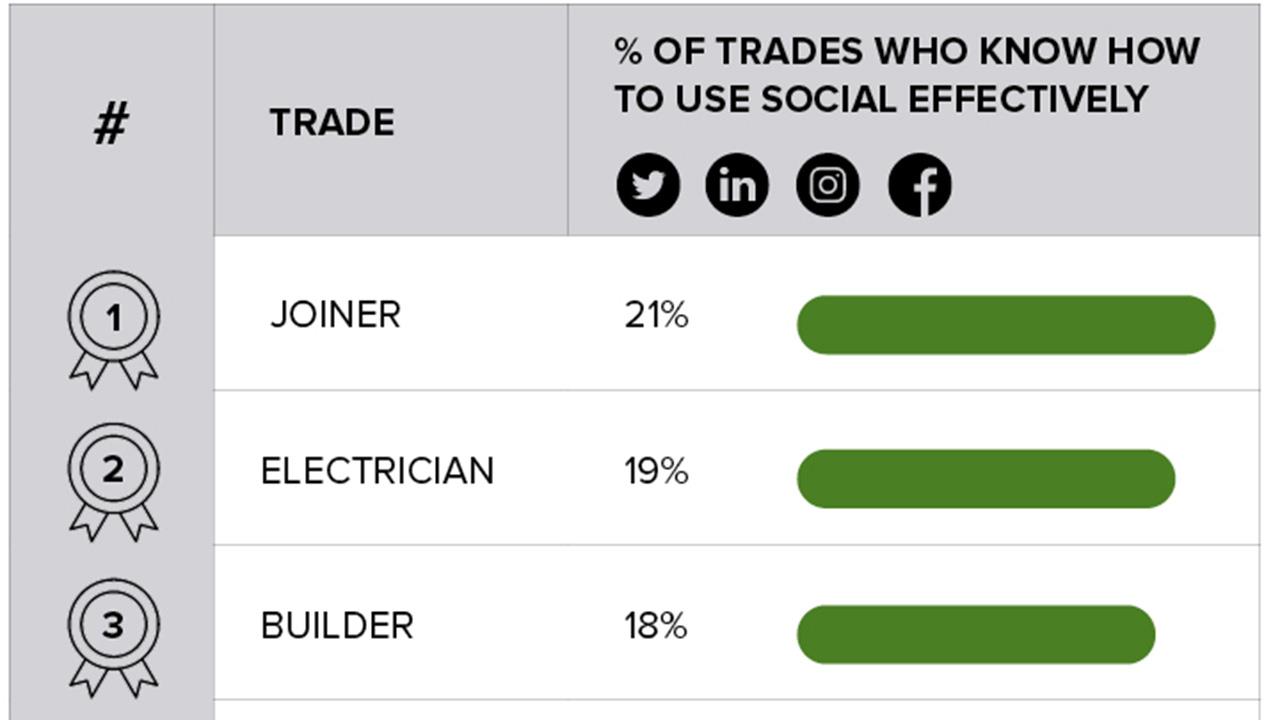 Social media has transformed businesses in all industries, but despite helping many tradespeople get more work, a staggering 85% say they don’t know how to use it effectively.

A survey of 500 tradespeople by IronmongeryDirect has explored how trade businesses currently use social media and how many are currently missing out on its benefits.

Almost half (47%) of tradespeople say that having a social media presence helps them get more work, with Facebook being the main platform (22%). This is for several reasons, including the ability to build stronger client relationships (15%), get ahead of competitors (15%). and interact with community groups (22%).

Such is the power of social media, that 16% of tradespeople believe it is now just as important, if not more, than traditional word of mouth. Because of this, 45% now actively advertise on at least one social platform and more than one in ten (12%) use social media as their only form of marketing.

However, despite recognising its importance, the vast majority of tradespeople say they are not using social media effectively. Nearly nine in 10 (85%) don’t know how to get the most out of it, with plumbers the least likely to maximise its potential (90%). Joiners are the most social savvy of all the trades, yet 79% still don’t know how best to use their channels to help their business.

While social media helps all trades bring in more work, builders are the most likely to attract new customers with it. Two-thirds (66%) of builders say their social channels help bring in business, followed by bricklayers (53%), and landscapers (51%). Plasterers are the least likely to see an increase in work (25%).

The trades most likely to get more work by using social media are:

On average, female tradespeople dedicate the most time to social media promotion, with over half (51%) pursuing leads online, compared to just 41% of men. They are also more likely to ask customers to leave reviews online (28% vs 23%) and such digital feedback is growing in significance.

According to BBC News, over 20 million business reviews are posted on Google every day and they can have a huge impact on a company’s performance. A recent study by Womply found that businesses with positive scores on review sites can earn up to 58% more revenue.

Overall, a quarter (25%) of trade businesses ask for reviews and a similar amount (26%) believe that positive comments can directly lead to more custom. However, more than a fifth (21%) of tradespeople worry about receiving negative reviews and the impact that might have.

Charlie Carlton, Head of Digital at IronmongeryDirect, said: “Whether you’re a start-up looking to increase brand awareness, or a larger firm trying to expand, most trade businesses can benefit from being on social media, so it’s definitely worth creating accounts if you don’t already have some.

“For those who already have social channels, our research has shown that the majority aren’t currently getting the most out of them. However, it doesn’t take that much time or effort to create a basic profile that can start to pick up work.”

MARKETING SOCIAL MEDIA SURVEY TRADESPEOPLE
Tweets by HVP
Make sure you’re on top of changes in the industry, and sign up for free to receive your monthly copy of HVP and our weekly email newsletter
SUBSCRIBE TO NEWSLETTER
SUBSCRIBE TO MAGAZINE