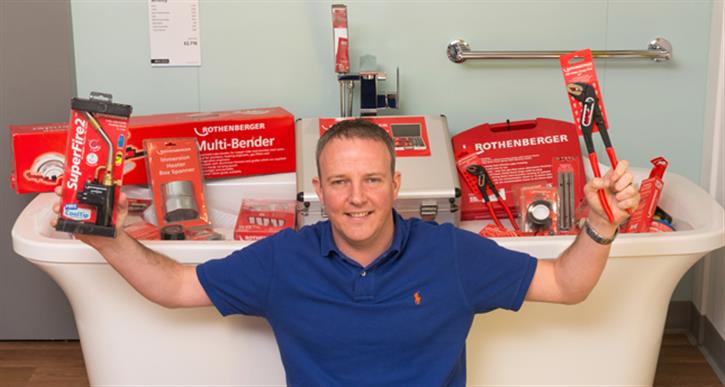 A budding plumber on the search for an apprenticeship has been crowned the champion of Plumb Center's recent #FillANabis competition.

Richard Stone, from Cardiff, was awarded a Nabis bathroom suite full of £1,000 worth of Rothenberger tools at his local Plumb Center showroom.

The light-hearted #FillANabis competition began in February to celebrate the launch of eight new brassware and four new sanitaryware ranges to Plumb Center's exclusive Nabis bathroom brand. The merchant asked plumbers and installers on Twitter what they'd fill a Nabis bath with for their chance to win it.

Mr Stone tweeted: "@plumbcenterUK I'm a plumbing student looking for an apprenticeship so I'd #FillANabis with all the tools I would need for the job."

On his win, Mr Stone commented: "I can’t believe I actually won – this is going to be really useful to help me kick-start my career. Thanks so much to Plumb Center for this, I will be eternally grateful."

But the giving didn’t stop there. @jldplumbing also tweeted Plumb Center asking to fill a bath with beanie hats from fashion brand MASATO, which donates a percentage of profits to the homeless. So Plumb Center has purchased a collection of beanies to give to the homeless.

There were also a number of comedy entries from Twitter's plumbing community, which Plumb Center has sent runner-up prizes to:

Richard Redfern, category director for plumbing at Plumb Center, said: "The #FillANabis campaign was all about celebrating the fact that this range is available exclusively to our customers and full to the brim with quality features, hence #FillANabis. Richard is a deserving winner and we hope that these tools help him in the early days of his career."

Richard Stone, who is @RichieRock1979 on Twitter, is currently searching for an apprenticeship in the Cardiff area.