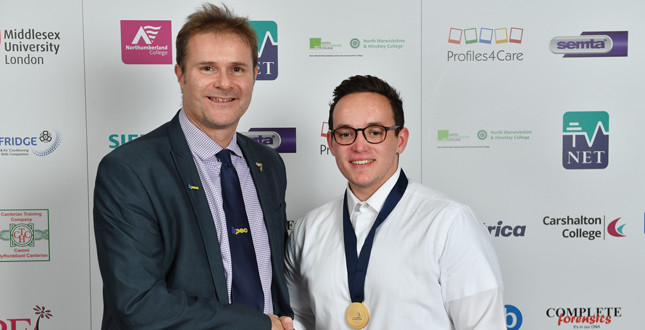 Jordan Picot has been crowned 2017 SkillPLUMB champion after excelling in an intensive three-day practical competition at The Skills Show.

Jordan, 20, and a student at Exeter College, won the gold medal in a task to install a small central heating system and a hot/cold water installation comprising a combination boiler, expansion vessel, pump, associated pipework and bespoke designed copper radiators and towel rails.

The task had to be completed within a strict timeframe and was marked against tough criteria including bend and joint quality, bend angles and clearance and measuring and marking out, which had to be accurate within + / – 2mm.

Taking second place and a silver medal was Russell Scott of Moray College. Third place and the bronze medal went to Matthew Barton of Kendal College.

Jordan, Russell and Matthew were all selected for the Team UK squad with the chance to represent their country in the forthcoming WorldSkills 2019 event in Kazan, Russia, along with fellow competitor Thomas Thomas from Coleg Meirion-Dwyfor.

Speaking after his win, Jordan said: “It feels amazing to win, I never thought I’d get that far and my heart was pounding when they announced the winner! I’m also pleased to have the chance to compete internationally – it’s a once in a lifetime opportunity and I’m really looking forward to it.”

“We have been so impressed with the standard of work produced,” said Neil Collishaw of BPEC, which organised the SkillPLUMB competition. “All competitors were really professional and are excellent role models for the thousands of young people who visited the show.”