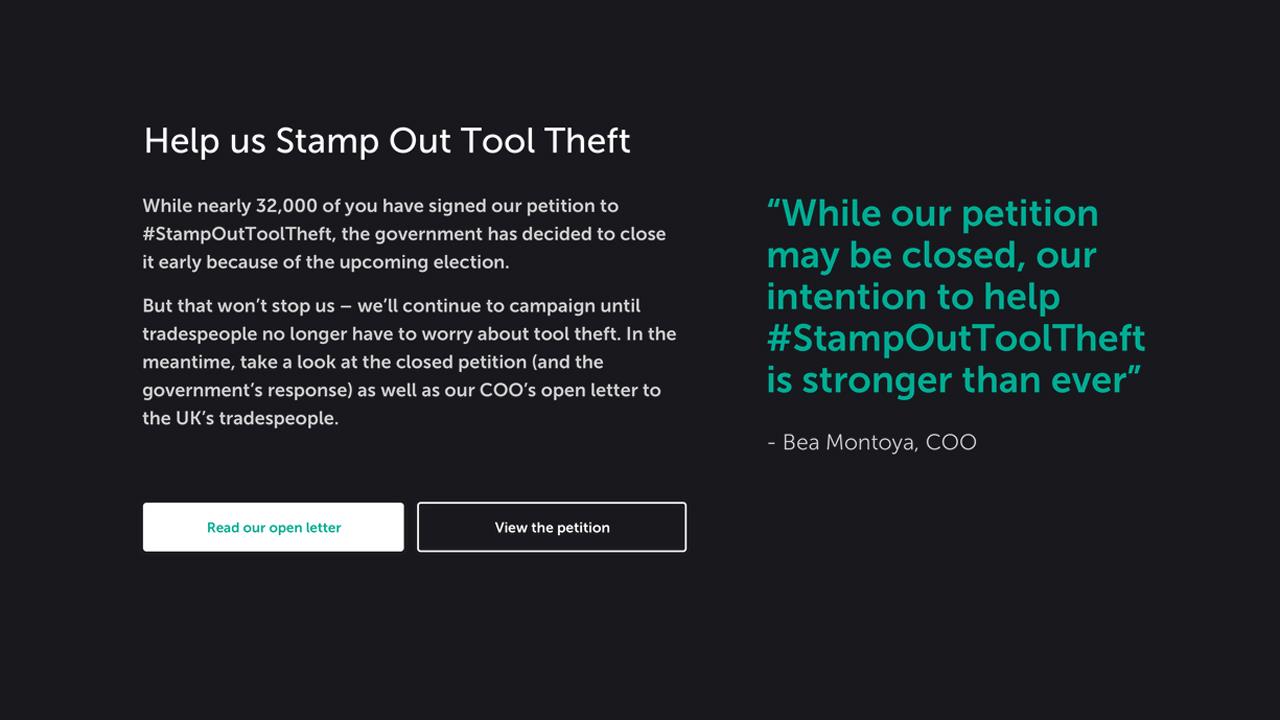 A petition calling for greater measures to combat tool theft has been suspended because of the upcoming election, due to general rules covering parliamentary petitions during purdah.

However, under the rules of purdah (the period of time between the announcement of an election and the formation of the new elected government) the parliamentary petition website has been suspended and no signatures can be added to any government petition until after the election.

Before the petition was taken down, it did receive a mandatory response upon reaching a milestone of 10,000 signatures, and the government stated that it “has no plans to amend existing legislation” and “The Theft Act 1968 includes robust measures for dealing with crimes of theft and handling stolen goods, including tool theft”.

SimplyBusiness, the company behind the petition, posted an open letter across its digital platforms to communicate the issue to tradespeople and reassure them of the company’s continued commitment to campaigning against tool thefts and for greater enforcement and regulation.

See the full letter below:

Dear tradespeople of the UK

Last week, the government permanently closed our petition to 'Stamp Out Tool Theft with the introduction of tighter regulation and greater fines' with less than 24-hours’ notice. The petition had 31,993 signatures. It had been growing at close to 1,000 signatures a day since we launched our campaign to #StampOutToolTheft and still had over four months left to run. For the best part of a week, it was the most popular petition in the UK.

This came just seven days after the government had issued a formal response to the petition — an obligation for all petitions that reach 10,000 signatures. From their response, we were disappointed to hear that the government had no plans to introduce minimum fines, nor clearly explain how they would use regulation to put an end to the black market for stolen tools. For us, it was the latest sign from the government that they're failing to take tool theft seriously — a sentiment shared by 84% of tradespeople.

Tool theft is destroying the livelihoods of tradespeople up and down the country. Our research shows that one in three tradespeople have had their tools stolen, costing victims over £3,000 on average, and leaving the vast majority unable to work. And all data suggests the problem is only getting worse — tool theft insurance claims have increased 54% in the last two years alone, and there's little sign of this slowing down. With an upcoming general election, tradespeople simply can't afford for this issue to once again slip down the political agenda.

While our petition may be closed, our intention to help #StampOutToolTheft is as strong as ever. We're determined to do all we can to support tradespeople in their fight against tool theft, and will continue to bang the drum as loudly as possible until something is done. We'd like to thank everyone who signed the petition, and has shown support for the campaign so far.