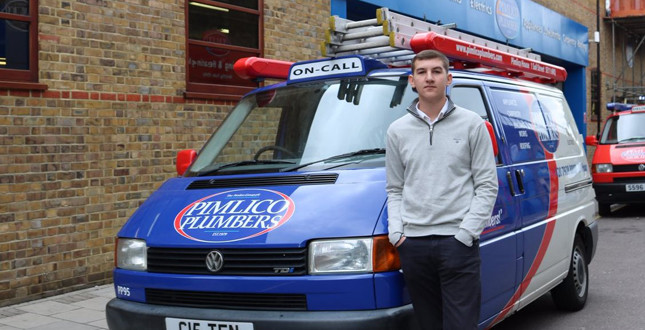 Pimlico Plumbers’ has chosen the winner of its social media competition to find its next apprentice, from hundreds of applications living in and around the London area.

Winner Lee Morrison, 18, from Camberwell, south east London, convinced CEO Charlie Mullins that he was the best #PickMeCharlie applicant through his post on Facebook.

In his entry for the competition, Lee said: “I think you should pick me to be your next plumbing apprentice because I'm extremely motivated and well driven into making a successful career in plumbing. I can relate to a lot of things that I've read and heard about your story, so to work for someone like yourself and to be a part of a company on such a scale like Pimlico plumbers would be honour.”

#PickMeCharlie launched four years ago, when candidates had to convince Charlie that they were the winner through a single Twitter post. Over the last couple of years, the company has broadened its competition entry platforms to posts on Facebook, and most recently, video entries on Instagram.

Due to the strength of the competition entries this year, Charlie invited a shortlist of people for an interview at Pimlico Plumbers headquarters in Lambeth.

Charlie said: “Lee comes from a long line of tradespeople and was studying at Lambeth College, so we know that the skill foundations are already there. He blew everyone at Pimlico away with his enthusiasm, and desire to achieve his aim of becoming a plumber.

“Every year Pimlico is continually inundated with requests for apprenticeships and #PickMeCharlie offers an opportunity for applicants to make themselves stand out in a very different way. Not everyone’s a dab hand at putting pen to paper and drive and determination is just as important to me, so allowing people to showcase that through different mediums, such as social media, is a no brainer.”

Lee added, “I know that if I want a successful career in plumbing, joining Pimlico is the way to achieve it. When the opportunity came up to start an apprenticeship with the best of the best, I grabbed it with both hands!

“I think people underestimate the success an apprenticeship can give you. In schools apprenticeships aren’t mentioned a lot, that’s why social media is a great way to reach out to young people. I’m really looking forward to getting first hand site experience and relevant skills I need to become a good, reliable plumber.”