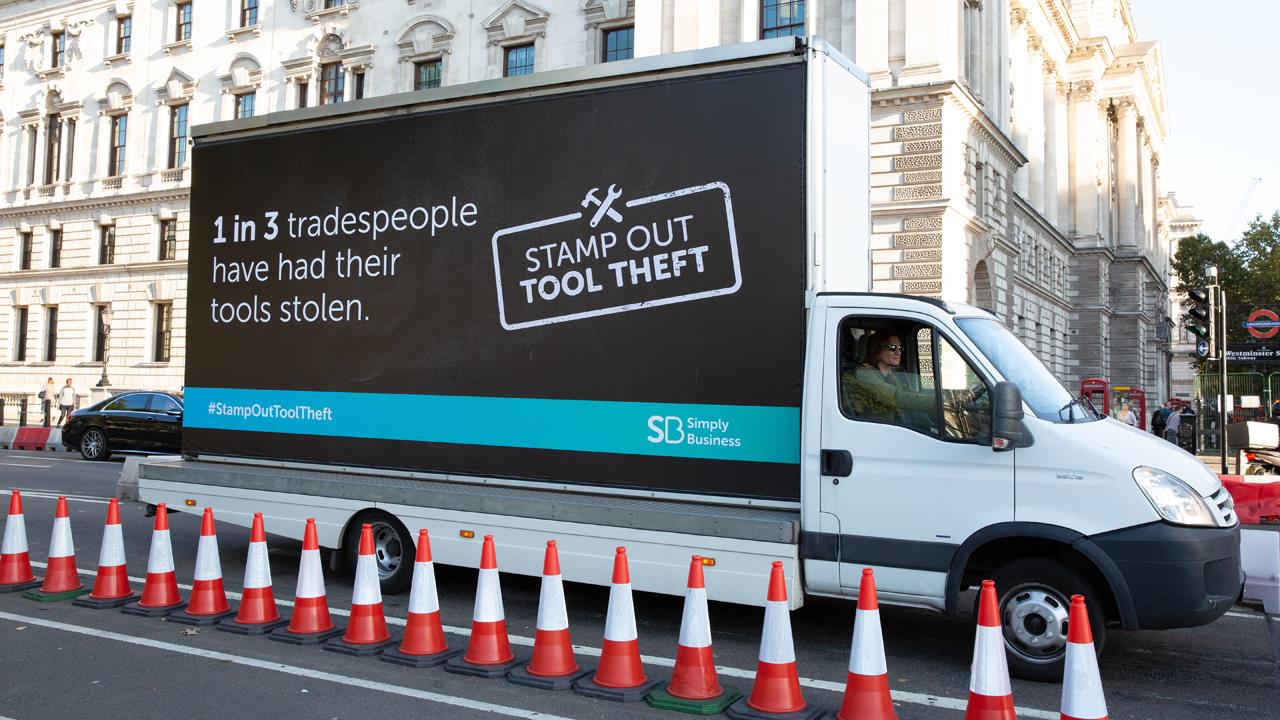 SimplyBusiness is calling on the government to implement greater fines for those convicted of tool theft, as well as tighter regulations on the selling of second hand tools.

The company has launched a petition with the aim of attracting 100,000 signatures for the measures to be debated in Parliament. The petition can be viewed here.

To mark the campaign, a mobile billboard was driven to the front door of parliament, laying bare the issue of tool theft to the government. The mobile billboard, announcing the petition on behalf of the thousands of victims of tool theft, then travelled to some of the capital’s biggest building sites across Battersea, Nine Elms, and Wandsworth. It also stopped off and visited well-known businesses on the way, such as Pimlico Plumbers, Screwfix, and Plumbase.

Tool theft continues to have a serious impact on the lives of tradespeople every year.

According to a survey of 1,000 tradespeople by SimplyBusiness, well over a third (37%) have fallen victim, while 65% also know someone who has. On average, tool theft costs £870 in lost earnings each. Almost a fifth (18%) lost more than £1,000 in lost earnings.

Adding to this, the average tools stolen are worth £2,135, costing more than a month’s average real time earnings. This means the average tool theft costs victims a combined £3,005 on average, taking into account lost earnings and replacing stolen tools.

Over a quarter (26%) of those surveyed couldn’t work for a few days, while just under a tenth (8%) were unable to work for over a week.

A staggering 84% of tradespeople don’t believe the government is doing enough to prevent tool theft. Just under two-thirds (60%) surveyed believe there needs to be greater sentences for thieves, while more than half (55%) believe there should be greater fines for those convicted.

Over a quarter (28%) of tradespeople believe the sentence for tool theft should be five years in prison, and over one in 10 (15%) believe a £10,000 fine should be imposed.

Bea Montoya, Chief Operating Officer at Simply Business, said: “Tradespeople are the backbone of Britain, but they’re being stopped in their tracks on a daily basis due to the ongoing tool theft epidemic. Tool theft rips through the lives of thousands of tradespeople and their families every year, with victims losing out on over £3,000 each on average – through lost earnings and replacing stolen equipment. Having their tools stolen doesn’t just impact their ability to work, but it affects their livelihoods too.

“Brexit is having a paralysing effect on British politics, but there are pressing issues at home which urgently need addressing. This is why we’re calling on the government to Stamp Out Tool Theft once and for all. We want to see greater fines imposed on those convicted, as well as tighter regulations on the selling of second hand tools which, because of their high value, are often stolen to sell on the black market.

“Putting these two measures in place will go a long way in combating tool theft, protecting the lives and jobs of millions of tradespeople up and down the country.”

BUSINESS CRIME FINANCE PETITION SIMPLYBUSINESS TOOL THEFT TOOLS
Tweets by HVP
Make sure you’re on top of changes in the industry, and sign up for free to receive your monthly copy of HVP and our weekly email newsletter
SUBSCRIBE TO NEWSLETTER
SUBSCRIBE TO MAGAZINE