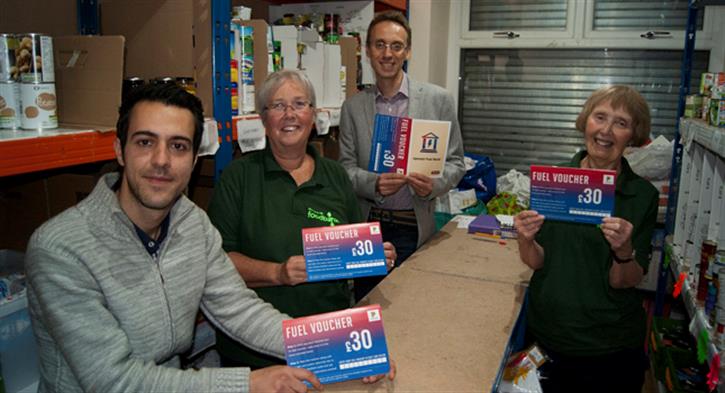 The Trussell Trust and energy supplier npower is launching the first ever Fuel Bank in Scotland.

Based at Glasgow’s South East Foodbank, the scheme gives foodbank users with pre-payment meters vouchers for gas or electricity, so they do not have to choose between ‘heating and eating’.

Because the scheme gives people around two weeks’ worth of energy, the value of the voucher will fluctuate between the winter and summer months: from April to the end of October the value will be £30 and this will increase to £49 from 1 November to 31 March.

First launched in April 2015 with the Trussell Trust, National Energy Action (NEA) and Durham Christian Partnership, the npower Fuel Bank has so far been trialled in four areas (Kingston on Thames, Durham, Gloucestershire and the Wirral) and is now being rolled out more widely.

Before making the decision to extend the scheme, npower commissioned NEA, the UK fuel poverty charity, to undertake an evaluation of the scheme.

In-depth interviews with a sample of people who had been helped by the Fuel Banks™ found that many were from households with dependent children, while almost a third said someone in their home suffered from ill health or a condition made worse by the cold. The inability to afford adequate power interrupted ordinary family life which in turn exacerbated conditions such as stress and anxiety.

The scheme is for people with a valid Glasgow South East Foodbank voucher, who, if eligible to receive the credit, could use it to repay emergency credit and top up their gas and electricity meter. This enables households that have run out of energy to get the power back on within a few hours and keep the lights and heating on for around two weeks.

Andrey Flannagan, manager of Glasgow South East Foodbank, said “This is a wonderful partnership and gives us the opportunity to support people in desperate need who are struggling with day to day living costs. Whilst we’ve been able to give people food we have often come across people who say they’re unable to cook it. Being part of the Fuel Bank makes such a difference to the services that our foodbank can provide – we now know that we can give out food and people can actually cook it as well as have warm water to shower – this will have an enormous benefit in terms of health and wellbeing.”

Guy Esnouf, npower’s director of corporate responsibility said: “Our first step was to trial the Fuel Bank in four areas last year. This proved the concept works - getting the right support to the people who need it most. We’ve now expanded to ten new areas across the UK – including opening Fuel Banks in Scotland – meaning we can reach thousands more people in crisis.”

Jim Robertson, Scotland development officer, The Trussell Trust, said: “The partnership between npower, The Trussell Trust and Glasgow South East Foodbank is very good news for the Foodbank and its clients. It could help stop the dreadful choice between feeding your family and heating your home. That’s got to be a step in the right direction for people experiencing a crisis.”