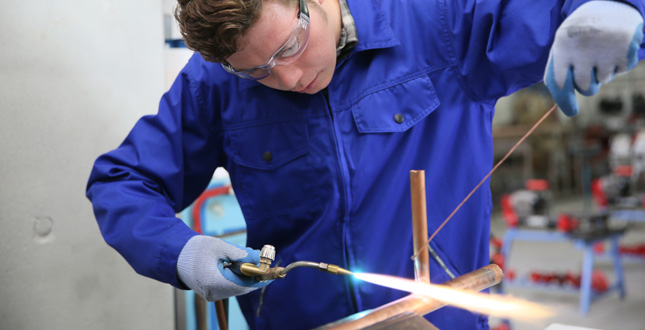 School leavers should be encouraged to consider an apprenticeship, according to the results of a survey by the Association of Plumbing & Heating Contractors (APHC).

According to the survey, which polled 1,830 homeowners across England and Wales, 86% of people agree that school leavers should be encouraged to consider apprenticeships rather than just going down the Higher Education route, with just 2% disagreeing.

In the same survey, which was released to coincide with National Apprenticeship Week (14 to 18 March, 2016), 81% of those questioned view the ability to learn and earn at the same time as a key opportunity provided by an apprenticeship, with 78% feeling it's a valuable stepping-stone to a good job and 77% placing importance on professional training.

While 19% of respondents acknowledged that higher education is not suited to everyone, the perceived benefits included: a better chance of getting a job, the opportunity to gain a broader experience of life within the workplace, and the chance to learn a useful skill.

Many recognised that we have a real shortage of skilled trades, with high levels of student debt associated with degrees and university perceived as a negative while apprentices are able to earn as they train.

In addition, nearly a third of the homeowners questioned (31%) wished they had enrolled on an apprenticeship when they'd left school, with this being highest in the 35-54 age bracket and geographically higher in the East Midlands and Wales.

The plumbing and heating trade remains one of the most sought after apprenticeships, with around 5,500 plumbing apprentices enrolling on a course in England and Wales during 2015. The industry has a long history of training on the job, as practical skills play a vital role in skills development alongside learning at a college or training centre.

Joseph Valente, the 2015 winner of The Apprentice who undertook a plumbing apprenticeship at 16 and went on to establish Impra Gas at the age of 22, said: "From experience I can say the benefits from undertaking an apprenticeship are huge. I was given an opportunity when I was 16 with a local Peterborough plumber, which progressed to a qualified gas fitter and then starting my own business. My apprenticeship has provided the foundation to found a successful business in an industry I'm passionate about. Plumbing is sometimes seen as a career for those who are less academic but it's a highly skilled job that requires diverse skills including maths & science, quick thinking and endless problem solving."

Mr Valente plans to take on a number of apprentices over the next two years. "My end goal is to become very successful as a product of an apprenticeship and leave a legacy behind, to give young people inspiration and tell them no matter what, you can achieve and become somebody," he said.

John Thompson, chief executive at APHC, added: "These findings are encouraging in showing the shift of attitude towards vocational on the job training, after many years of apprenticeships being seen as the poor relation to higher education. Tuition fees and the rising cost of higher education in recent years leaves many graduates thousands of pounds in debt, with no guarantees of a job in a competitive job market whereas apprentices are earning while learning valuable skills to get a head start.

"We're working in collaboration with the government, training providers, leading employers and apprentices to ensure modern apprenticeships meet the need of all parties and newly qualified staff are ready to take on the challenges of the plumbing industry."

APHC is currently working with the government to shape apprenticeships via the Trailblazer initiative. Developed directly by employers across the industry, the new apprenticeship has been designed to be deliberately challenging both in the level of skills and depth and breadth of knowledge required. After four years, the apprenticeship could lead to career development with Building Services Engineering, Public Health Engineering or onto a recognised degree.