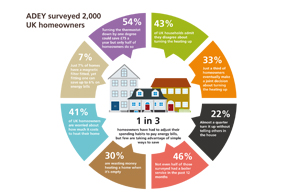 After the warmest year on record, arctic temperatures have now hit the UK, causing homeowners to finally crank up their home heating.

Home heating is a bone of contention for many UK households with 43% admitting they disagree with those they live with about when they should turn the thermostat up. While almost a third claim they eventually make a joint decision, almost a quarter (22%) admit to turning it up without telling the others in the house because they’re worried about cost implications.

More than a third (37%) of the 2,000 UK homeowners surveyed said they’ve had to adjust their spending habits to pay their energy bills, but ADEY also found that few are taking advantage of the simplest ways to make their homes more energy efficient and save money.

Only 46% have had a boiler service in the past twelve months, so many homes could be at risk of relying on an inefficient system. Many could also be wasting a significant amount of money by leaving the heating on when no one’s at home, with as many as 30% of homeowners saying they don’t turn the heating off when they’re out. A further 42% also admit that they turn the heating up instead of putting on a jumper.

The Energy Saving Trust (EST) estimates that households can save as much as £75 a year by turning the thermostat down by just one degree, yet, according to ADEY’s research, only half (54%) of homeowners turned down the dial. The EST also estimates that households could increase their boiler efficiency by around 3% by using a cost-effective chemical inhibitor in their system. ADEY also suggests that a further 6% could be saved year on year by installing an effective magnetic filter to protect their heating system from corrosion, ensuring it works as efficiently as possible. ADEY’s research found that just 7% of those surveyed had one fitted.

ADEY’s managing director, Kelvin Stevens, said: “The winter season has been mild so far and many of us have only used our heating sporadically, but temperatures are taking a turn for the worse and we’ll need to rely on it more than we have to keep us warm. Obviously the more we use, the more we pay, but this research shows that our behaviour can also have a big impact on heating costs.

“There are many small changes that everyone can make to save money and ensure that we’re not paying over the odds for our home heating. From reaching for a jumper before the thermostat, to checking the boiler’s efficiency with a yearly check and making sure its performance is protected, all of these little things can add up to big savings.”

The EST’s latest consumer attitudes poll the UK Pulse found 73% of consumers are worried about the cost of heating their homes.

According to Tom Lock, certification manager, energy efficiency at the EST: “The Energy Saving Trust is committed to providing consumers and the supply chain with independent and trusted information about products that will help them improve the efficiency of their heating system and improve the comfort of their home. Our Endorsed Product standards highlight products that will help householders use less energy and cut their energy bills.”