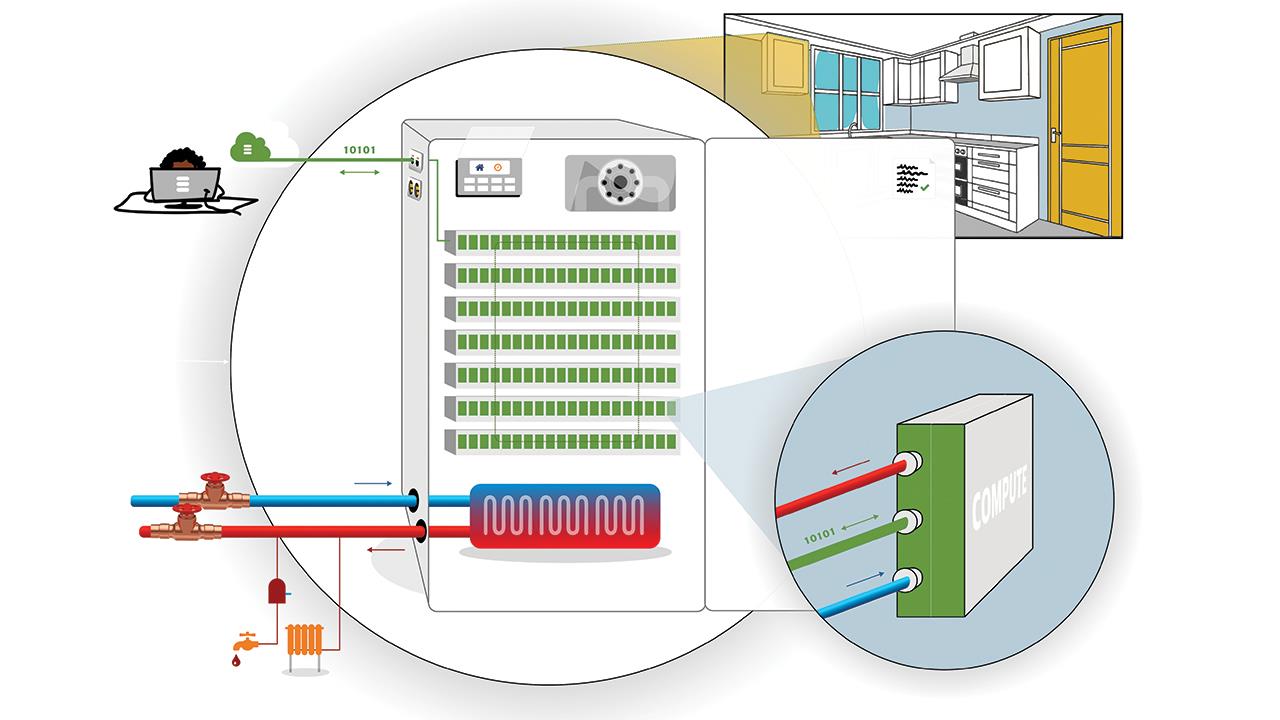 Cloud computing is a sector that’s expected to grow exponentially over the next few years. According to Reportlinker.com, the global cloud computing market value is expected to expand from approximately £328 billion in 2021 to £697 billion by 2026.

Although profits are basically there for the taking for the many companies in this area, one major cost concern for cloud computing providers is cooling. A lot of heat is produced by the data centres that run cloud computing services, and to keep these systems from overheating, cooling systems are needed, which can contribute as much as 30% of their overall running costs.

Essentially, companies are funnelling significant money into getting rid of what is a waste product in the cloud computing process. But, what if that waste heat could be used for something useful, such as heating people’s homes? That’s what one pioneering UK company is trying to achieve.

Thermify is a new venture that straddles both the cloud computing and heating industries. Not only does it provide cloud computing services for its customers, it will also provide heating for UK homes. It plans to achieve this goal by installing boilers in homes, but they aren’t your conventional boilers, as Dr Garry Felgate, Energy Lead at Thermify, explains: “We are installing in a home a bank of computer processors in a box that looks like a boiler. We are feeding a cold water inlet/hot water outlet, but instead of putting a gas line in, we’ve got a data link coming in.”

In essence, the ‘boiler’ in a customer’s home also acts a cloud computing server. When a householder makes a request for heat from their boiler, the Thermify HeatHub boiler will ask to undertake some cloud processing work. “Instead of gas coming down the gas line, computing work comes down the data line, and all those processors do is give off heat,” Dr Felgate adds.

Although the concept is undoubtedly novel, what are the advantages for the end-user? Well, for one, the customer doesn’t pay for the electricity to run their boiler.

Dr Felgate says: “We are selling that computer processing. We’re charging whoever’s doing that processing for their compute, and when the house is warm, that computer stops doing jobs. But it effectively means that the electricity to do that has been paid for by the compute user, not by the householder.”

As the running costs are covered by the cloud computing customer, this means that the company is able to set the cost of heating and hot water for the customer at an ‘affordable’, flat rate. This is currently set to be £50 a month. “If you were to have a [conventional] heating system by electricity, you could not do it for £50 a month throughout the year,” Dr Felgate notes.

In terms of the actual boiler cost, Dr Felgate says it’s being pitched around the same price “as a good quality Vaillant or Worcester Bosch boiler”; approximately £2,500.
He adds: “Our production costs are higher than that at present, and will remain higher than that, but we will recover the costs through the compute usage fairly quickly.”

In terms of other benefits for customers, over and above ditching gas for electricity, Dr Felgate says Thermify is in “early stage discussions” to improve their environmental impact by supplying 100% of electricity used for the boilers from renewable sources.

He explains: “It is still to be tested but we are confident that we can do that, in part because we have the benefits of not having the cooling costs.”

The environmental benefits also, thankfully, won’t be counterbalanced by their cloud computing services being utilised for the mining of cryptocurrency, which typically require significant amounts of electricity to create new coins, and is generally considered to cause a negative environmental impact. “We’re not addressing Bitcoin,” confirmed Dr Felgate. “It’s not our market, mainly for environmental reasons.”

The real game changer for customers with the Thermify HeatHub, according to Dr Felgate, is around delivering more affordable, low carbon technology. He says:

In regards to the ins and outs of installation, the boiler shares a surprising amount of similarities with heat pumps. Although the footprint of the unit is the same as a gas boiler, a separate cylinder is required to provide hot water for the home. It also goes without saying that the installer will need good electrical skills, and not gas skills, when installing the boiler.

Dr Felgate also says the system should be installed in homes with adequate levels of insulation – ideally homes EPC-rated A-C – to ensure the best performance.

Underfloor heating is the preferred option on new installations, however Dr Felgate suggests that there’s value in assessing the size and performances of current radiators in retrofit scenarios, as the boiler puts “hot water out at a higher temperature than a heat pump and a lower temperature than a gas boiler”.

In addition, recent tests conducted by Energy Systems Catapult of the system performing in a multitude of different homes have shown that the HeatHub is suitable for operation in a large range of property types, including the common suburban semi-detached home, which Dr Felgate says are more challenging for the likes of heat pumps.

The Thermify HeatHub isn’t commercially available yet, with final testing expected to be completed in March. However, it is scheduled for release in the second half of 2022, with a “modest install” target of 1,000 boilers by the end of the year, and a target of 40,000 installs within three years, according to Dr Felgate.

The boilers are being manufactured in the UK, at Sony’s factory in Bridgend, Wales. “There are elements we will need to bring in from overseas, but we are determined to have a British-based solution that’s manufactured in Britain,” adds Dr Felgate.

Conversations regarding HeatHub installations are already occurring with housebuilders and social landlords, says Dr Felgate, and engagement with the installer community is planned to start imminently as well.

Thermify has already been approached by businesses in other sectors, including healthcare, which are interested in applying the technology to own their buildings, however the focus is firmly on the domestic market for now, says Dr Felgate.

BOILERS DECARBONISATION NET-ZERO THERMIFY
Tweets by HVP
Make sure you’re on top of changes in the industry, and sign up for free to receive your monthly copy of HVP and our weekly email newsletter
SUBSCRIBE TO NEWSLETTER
SUBSCRIBE TO MAGAZINE