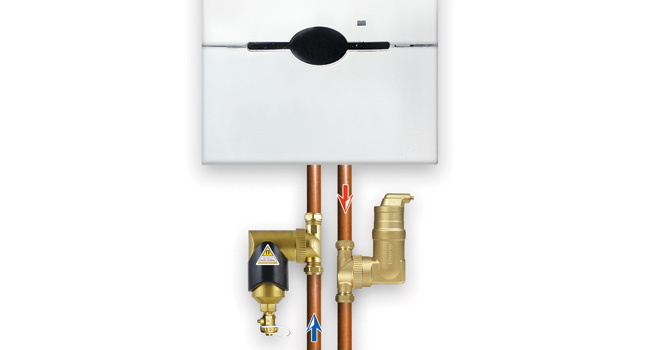 Poor system health is now regularly attributed to the presence of dirt, but this diagnosis may not always address the root cause of system problems or result in the most effective water treatment, says Roger Williams. Here, he explores the relationship between air and system performance.

There is no denying that the removal of system dirt has delivered tangible benefits for many UK households and the wider environment, through reduced energy use and improved system efficiency. The use of system chemicals to remove and inhibit dirt formation has been adopted at regulatory level within Part L of the Building Regulations, and energy suppliers now also recommend dirt separators to householders as a protection measure.

While such treatments will deliver improvements in system health, in some instances, they can fail to address the true cause of system problems and may not provide the optimum long-term solution.

Systems can become blocked by both dirt and air. Magnetite, limescale and debris can accumulate in radiators, pipework and around components, slowing flow rates and forcing boilers and pumps to work harder. Similarly, when large amounts of air become trapped within radiators and pipe bends, air pockets can form, placing additional pressure on the system and significantly reducing radiator heat output.

The effective removal of air from the system can prevent all of these problems from occurring. The initial presence of air is unavoidable. It occurs naturally within water and often enters systems when they are filled, refilled and modified or via gaps and leaks in pipework. Air is typically present in three forms – free air, micro air bubbles and dissolved air – and can have an immediate effect on system performance, especially if large volumes of free air become trapped when systems are filled with fresh water.

Air is also essential for the development of magnetite, which only occurs when metal, water and air combine. Hence, the removal of excess air eliminates the conditions necessary for magnetite to form, as well as helping to prevent blockages caused by the build-up of magnetic dirt.

With this in mind, it should come as no surprise that excessive energy consumption can also be traced back to the presence of air within a system. In fact, independent research commissioned by Spirotech found that energy use can increase by up to 6% within days of a heating system being commissioned, as a result of air slowing flow rates and preventing radiators from heating evenly.

Add to this a further 7.4% rise in energy use, as a result of dirt and debris accumulations largely generated by the very presence of air, and it becomes clear that air removal measures are important for maximising system efficiency. This is particularly significant for the latest high-specification boilers, the efficiency of which can be heavily compromised by air and dirt.

Once the true cause of system blockages and inefficiencies is understood, it is apparent that component failure and full system breakdowns can also be avoided through the removal of air.

Valves, circulation pumps and heat exchangers can all suffer as a consequence of dirt and debris build-up, leading to underperformance, malfunctions and, in some cases, full component failure that results in costly replacements for householders.

If air is eliminated, so too are the conditions for the dirt formation that poses such a threat to system reliability. Spirotech’s research found that system breakdowns could be reduced by up to 27% when dirt separators are installed, 21% when deaerators are fitted and 48% when both products are installed on a system.

Solutions for treating the cause

The air circulating within systems can result in more serious problems than the radiator cold spots and annoying noises that householders will most often report to heating professionals. Air can be the root cause of system blockages, inefficiencies and breakdowns, and installers should consider solutions that extend beyond manual venting, which is only a temporary remedy.

Automatic air valves are an option, but they may only help to remove large bubbles of free air from a system, rather than removing the air before it gathers. For new systems, the best practice is to install a deaerator, such as the SpiroVent RV2, which can remove large and small bubbles of air from water to help prevent air build-up and the onset of corrosion. When installing a new boiler to an existing system, it is still advisable to fit a deaerator to prevent future air accumulations, but it should be installed in conjunction with a dirt separator like the SpiroTrap MB3 to help protect the new components from any existing dirt in circulation.

In practice, the installation of a deaerator can also deliver significant time savings when commissioning systems. As well as preventing callbacks to vent radiators, it can also help save installers time and money, in addition to the savings enjoyed by end-users.