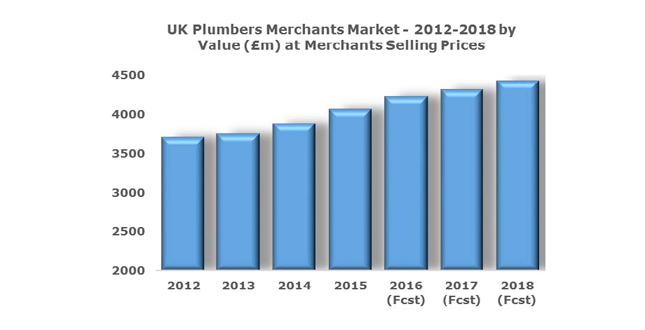 The plumbers’ merchant market was worth an estimated £4 billion in 2015, having recovered strongly in recent years. Demand has increased since 2013, leading to greater demand for plumbing materials, bathroom and shower products, and the plumbers’ merchants market is forecast to grow by around 4% in 2016, according to a report by AMA Research.

Increasing demand has been attributed to the improving economic climate in general since 2013, with demand increasing for both new work and RMI activity.

Price competition remains fierce and AMA Research believes this may influence margins going forward. In order to differentiate themselves, some plumbers’ merchants have invested in improving the overall customer experience through enhanced service, such as extended opening times, greater availability of stock and heightened promotional activity. Many have also expanded their online presence, to ensure that they compete with rising internet sales.

Consolidation has been a feature of the marketplace in recent years, as nationals have acquired smaller regional operations in order to extend their reach and range of services. However, many regional and independent merchants have performed well, with some expanding their number of branches to improve their product offering and stock levels to meet local needs.

It is extremely difficult to forecast the impact of the outcome of the EU Referendum on the economy going forward. Several economic forecasts suggest that the UK economy will start to slow, with business and consumer confidence affected, potentially with lower GDP growth in 2017 and 2018. The situation may improve after this, depending on the outcome of trade negotiations, both within and outside the EU, which have yet to take place.

Both Travis Perkins and Wolseley, two of the leading merchant groups in the country, have streamlined the plumbers’ merchant sides of the respective businesses as a result of uncertainty in the market.

“While there are indications of a slowdown in growth in the housing and commercial sectors from mid to late-2016, the plumbers’ merchants market is still forecast to increase by around 4% compared with 2015, with a further 2 to 3% per annum expected from 2017 onwards” said Keith Taylor, director of AMA Research.