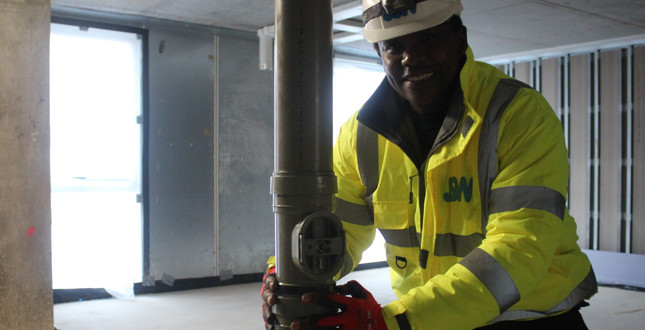 James, who works out of the Birmingham-based company’s London office, devised a gap-fixing method that has impressed Polypipe Terrain so much so that the company plans to incorporate the aid in its installation manual.

While working on a new 10-storey residential scheme, James was following the traditional method of marking and withdrawing the pipe to maintain the correct expansion gaps between fittings on a heavily loaded duty stack pipe.

James explained: “The downward force of the installation process can lead to movement at the joints, so I came up with the idea of fixing a 12mm spacer between the gaps of the fittings using piping instead. I cut pieces of piping and married them to create a solid and accurate fit. The spacers can be removed easily at second-fix stage.”

Alan Whyte, J S Wright Senior Contracts Engineer, added: “The ‘Mwangi Clip’, as we have dubbed it, is a real time and a cost saver. It is so strong that you can literally stand on it without compromising the expansion gap. The clip avoids having to replace sections of pipe and, much worse, remove tiles and sections of sanitary ware later in the building process.

“Making use of a seal ring adaptor above and expansion coupling below, James’ method also provides greater flexibility in allowing for fittings to be turned to suit site requirements post-installation.”