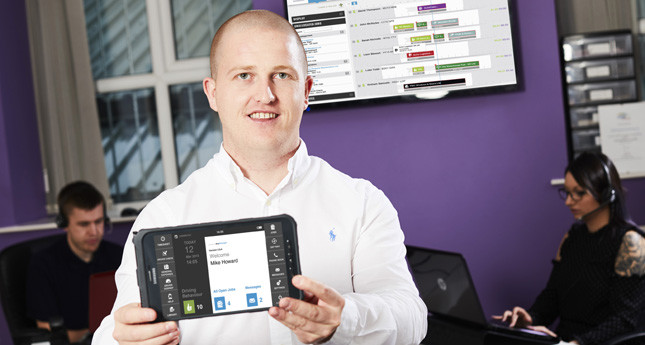 Once jobless, plumbing and electrical technician Jordan Woods is on track to make his first million by the end of the year, thanks to a bit of help from BigChange

Leeds-based tradesman Jordan Woods now runs a thriving property maintenance business, but just six years ago his future didn’t look so bright. Jordan started his working life as a plumbing apprentice at the age of 14, working his way up to Operations Manager for a large maintenance and facilities management business. Trouble struck in 2011, however, when he was made redundant by the firm, along with many others. As a young father to a newborn baby boy, this couldn’t have happened at a worse time.

Jobless and struggling to support his young family, enterprising Jordan borrowed a few hundred pounds from his stepfather and bought a van and insurance. Eager to put his plumbing and heating qualifications to use, he listed his services on a free trades directory in the hope of gaining paid work. Jordan was ecstatic to receive his first call from a home in Harrogate, where a leak was causing havoc. After putting fuel in his van and paying for parts to do the job, he came away with £13 profit, which he spent buying fish and chips and baby food for his family.

In the weeks that followed, the phone didn’t stop ringing and Jordan started to generate strong referral business. The real breakthrough came when he gained a small contract with a Leeds-based property management firm.

Jordan said “The reality was, I was just a one-man band going from job to job to make ends meet. But I dared to dream and had big ambitions for my family. People told me I was just a dreamer and to 'get real'. At that point I put together a simple business plan for what I wanted to achieve over the next five years. Today it sits in a frame inside my kitchen as a reminder of those tough beginnings."

With a growing business, Jordan worked around the clock and was able to take on another engineer and an administrator, working out of a small unit in Leeds. But things quickly spiralled out of control. Reliant on manual planning and paperwork, the brisk pace of work meant important information was getting lost in the system. Jordan knew he needed to find a better way to manage his business.

Jordan's company became one of the first users of Martin's new JobWatch platform, an all-in-one management system for any business with a mobile workforce. The technology makes it easy for companies to plan, manage, schedule and track their operations and the system was just the growth accelerator that Jordan was looking for.

Starting with three mobile workers in 2011, Woods Building Maintenance now manages a team of 18 engineers on the system.

According to Jordan, the technology has been a revolution for his operation: "We're about to hit a very special milestone this year; we’re on track to reach revenue of £1 million by the end of 2017. When I look back at where I’ve come from, it's a very special feeling. The BigChange system has enabled us to grow very rapidly - between 30 to 40% every year. I'm a very humble person, but our growth has been immense and we are profitable. I couldn't have grown like this if it wasn't for the BigChange technology. It has been priceless."

Commenting on Jordan's achievement, Martin said: "I am so proud of what Jordan has achieved for his 30-strong team and for his family. It's a truly inspiring story and just goes to show what can be achieved when you apply yourself with dedication, hard work and tenacity. Woods Building Maintenance is a pleasure to work with and we look forward to working with them as they continue to grow and push past many more million pound milestones."

Already covering Yorkshire, The Humber and the North West, Jordan's next foray is into the Midlands and London. The company has significant contracts with four of the largest insurance companies in the UK and also works with the NHS and leading national hotel and restaurant chains.