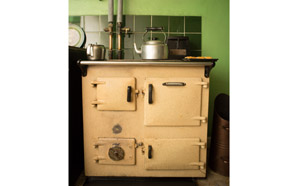 Rayburn has tracked down its oldest known working model in the country, after running a nationwide competition.

The 1948 Rayburn No. 2 was discovered in the kitchen of East Hill Farm in Barnstable, North Devon, where four generations of the Bray family have used the central heating range cooker.

The competition was entered by Matthew Bray – a third-generation farmer – when he visited the Rayburn website to investigate buying a new model for the farm’s extension. He provided the company with details of his current system, including a photo, and became the nationwide winner.

As a prize, Mr Bray was offered a new model of his choice and opted for an oil- fired 699K. The new Rayburn is capable of heating a property with up to 20 radiators, according to the company, providing plenty of domestic hot water and cooking capabilities. Meanwhile, the back boiler of the No. 2 is still supplying hot water to the bathroom and taps, and will continue to be used for this purpose when the family build a new ground floor washroom later this year.

The No. 2 proved popular when it was launched in the late 1940s. Available in three versions, all models featured a main oven with a warming oven underneath and did not have an insulating lid on the hotplate. However, its main selling point, which is retained in modern Rayburns, was the integration of a boiler for providing heating and hot water.

Regarding the new model, Mr Bray explained: “We are in the process of building a new dwelling on the side of the farmhouse, which will be a new home for me, my wife and two sons. The 600 Series will be the central focus of the new kitchen and will undoubtedly be used just as often as the old one. If it goes on for as long as its predecessor, we’ll be very pleased indeed – certainly my mother plans on using hers for many years to come!”