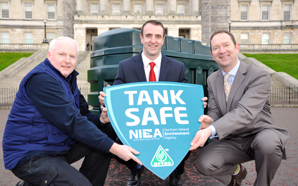 A campaign for oil tank safety awareness has been launched by the Oil-Firing Technical Association (OFTEC), in collaboration with the Northern Ireland Environment Agency (NIEA).

David Blevings, OFTEC Ireland manager, said: “Steel and plastic oil tanks provide safe and sound storage for home heating oil throughout the year. They sit in the garden and endure rain, frost, snow and even some sunshine. Like all products, they have a definitive lifespan and the aim of our joint campaign with NIEA is to remind householders that oil tanks should be installed and serviced appropriately.”

Meanwhile, Mr Durkan praised the campaign for its consideration towards environmental impact. “Pollution from spillages of oil can be very damaging to the environment and to the aquatic environment in particular,” he said. “I welcome this joint ‘Tank Safe’ campaign driven by my Environment Agency and OFTEC to help reduce the number of oil-related water pollution incidents throughout the North through a ‘best practice’ approach.

“The campaign strives to encourage responsible ownership and storage of oil at domestic, agricultural, and commercial premises by raising awareness of simple measures to prevent loss of this valuable non-renewable resource from storage tanks which will, in turn, help safeguard the environment and minimise the risk of expensive remediation by the tank owners.”