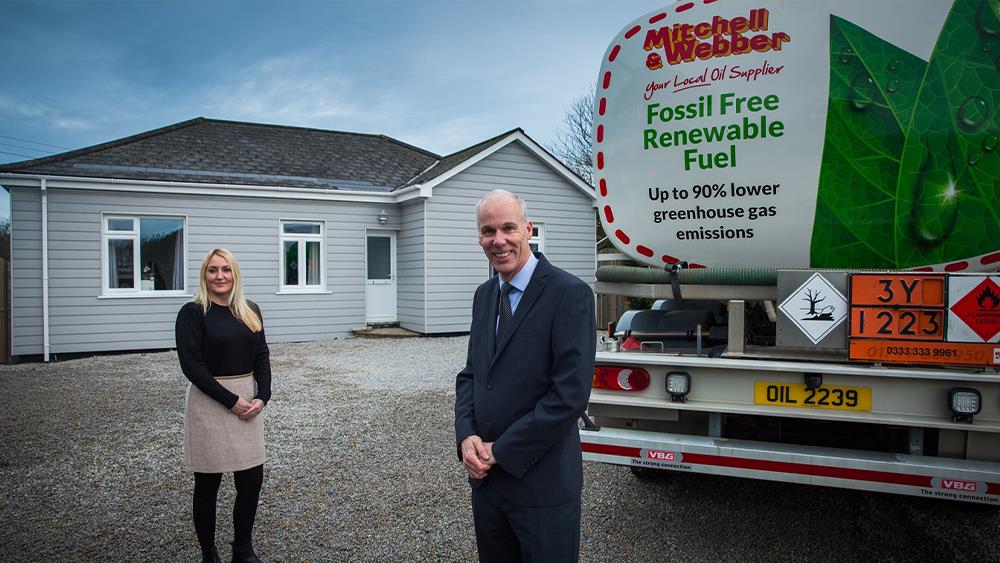 Zoe Milward of Cornwall, owner of the first property in the UK to trial HVO, with John Weedon, director of South West fuel supplier Mitchell & Webber.

While latest government statistics show that the number of fuel poor households in England is declining, down 1.6% on the previous year, 3.18 million (13.4% of the population) are still struggling to meet their energy costs.

The figures also highlight that households off the gas grid are still more likely to be fuel poor than those on the gas grid (18.2% vs 12.7%), while the fuel poverty gap - the reduction in fuel costs needed to take a household out of fuel poverty – is over three times higher in rural areas, at £585 compared to £180 in urban regions.

This is largely because rural properties tend to be older, larger and less energy efficient, making them more difficult and expensive to heat.

Warm Homes Week, an annual event run by National Energy Action (NEA), brings hundreds of organisations together to explore the challenges and solutions needed to tackle the scourge of cold homes and fuel poverty that continues to blight many people’s lives.

As the need to take decisive action on climate change becomes increasingly urgent, concerns over the high costs involved are beginning to surface. Support has been pledged to help some of those on the lowest incomes make the necessary changes but OFTEC says many households deemed ‘able to pay’ will be adversely affected, with those in rural areas likely to be hit particularly hard.

Malcolm Farrow, head of Public Affairs at OFTEC, says: “Decarbonisation is going to be extremely costly, there is no getting around this fact. Financial support is, quite rightly, being offered to the fuel poor but our concern is how rural households who are ‘just about managing’ will meet the high cost of installing a new low carbon heating system plus the expensive home insulation improvements often needed.

“The risk is these households will either be pushed into financial difficulty or simply not able to take action, so progress on decarbonising the off-grid sector will stall.”

In the wake of Covid and the many conflicting demands on public and household finances, a just transition to a net-zero future must now be secured for all.

OFTEC says this requires a more pragmatic, flexible approach; one that offers households a range of more affordable, practical low carbon heating solutions than those currently on offer – and renewable liquid fuels should be part of that mix.

Successful trials of a fossil free fuel that offers an almost drop-in replacement for heating oil are underway in a range of rural homes and buildings across the UK, spearheaded by OFTEC and the UK and Ireland Fuel Distributors Association (UKIFDA).

The fuel, called Hydrotreated Vegetable Oil (HVO), is made from waste materials, certified as sustainable by the International Sustainability and Carbon Certification (ISCC), and immediately cuts carbon emissions by almost 90%. Converting oil heating systems to run on HVO is also simple and typically costs around £500.

Malcom Farrow concludes: “A renewable liquid fuel solution would help overcome the crucial cost and disruption issues many rural households face and in a recent survey of over 1,500 oil heated homeowners, an overwhelming 98% said they would be interested in this option.

“This Warm Homes Week we are highlighting the strong case to include renewable liquid fuels in future decarbonisation policy and calling for increased support to ensure this more affordable route to cutting emissions is secured for rural households.”

HEATING NET ZERO CARBON OFTEC RENEWABLE ENERGY
Tweets by HVP
Make sure you’re on top of changes in the industry, and sign up for free to receive your monthly copy of HVP and our weekly email newsletter
SUBSCRIBE TO NEWSLETTER
SUBSCRIBE TO MAGAZINE