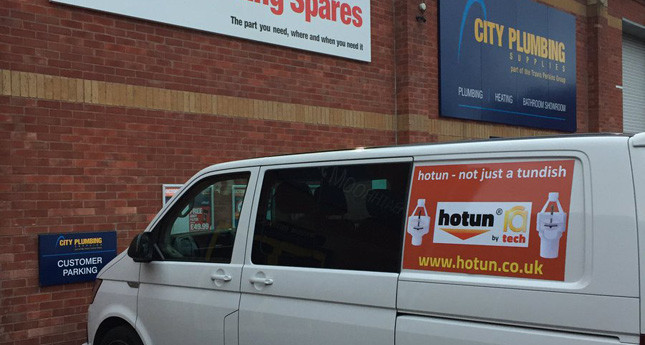 Following a successful six-month trial, hotun products will now be available in every CPS branch throughout the UK.

The hotun and hotun hiflo products won the Travis Perkins Innovations Award in 2016, and were trialed in 32 CPS stores earlier this year.

The hotun range will now feature in CPS' October Offers brochure. To support this promotion, CPS is putting a starter pack of each item into all remaining City Plumbing branches.

Inventor of hotun, Russell Armstrong, is visiting the Derby branch of CPS to promote this nationwide rollout.

Russell said: "The news that Travis Perkins are rolling out the hotun range through all of their UK stores is very exciting for us. In two short years, we have gone from invention to a major national.

“This proves that anyone from our wonderful industry can, with the right motivation and plan, come up with an idea and get it into the market successfully. To have been trialled in 30 or so branches over the last six months and then rolled out validates the product and we would like to thank everybody in our team from design, production & to distribution who have helped us in our hotun story.”

According to the company, the hotun and hotun hiflo dry trap tundishes allow a safe, visible means of discharge from a sealed system boiler or unvented water heater's temperature/pressure relief valve to be compliantly connected to an internal waste or soil pipe, without allowing foul odours back into the building.

Russell said: “To be mentioned in the same breath as the phenomenon that is Adey MagnaClean is such an accolade, and to think people are comparing our story with the likes of Chris Adey is truly an amazing achievement."