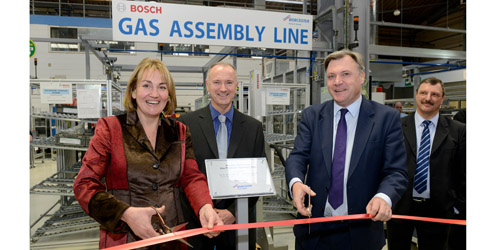 The two MP's were welcomed with a tour of the factory, which is home to Worcester’s Oil-fired Centre of Excellence and produces around 25,000 oil-fired boilers each year, before cutting the ribbon on a new £2.5 million production assembly line that will see gas boilers manufactured specifically for export to Belgium.

This new line marks the first stage in the company’s export plans, and it is expected that the line will go on to produce gas boilers for the American market plus 20 other European countries.

Bob Murdoch, manufacturing director at Worcester, Bosch Group said: "We are delighted that the new production line is now ready for action. The Clay Cross site has been traditionally renowned for the quality production of Worcester’s popular Heatslave and Danesmoor oil boilers, and it is fantastic that the latest investment that will see the factory so involved in this new venture. This is just the start of the project and we are looking forward to seeing how this develops in the future."

Ed Balls, Shadow Chancellor, said: "I'm delighted to officially open the new production line for gas boilers by Worcester, Bosch Group. Touring the factory and meeting the workers here, it is clear to see why Worcester is one of the UK’s leading businesses. And I congratulate the Board for showcasing the UK's excellent and advanced manufacturing industry by developing and exporting boilers to meet the requirements of the European and American markets.

"There is clearly much to celebrate here today – a UK business leading the way on product development, manufacturing and a great workforce with jobs for the local community."

The first of the new gas boilers is planned to come off the production line in December 2014 and will sit neatly alongside the existing high-efficiency oil-fired Heatslave and Danesmoor range of boilers.