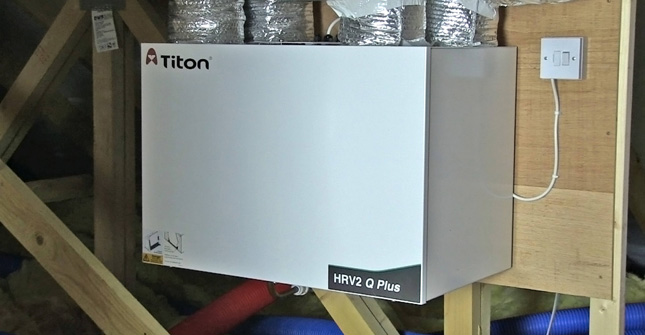 The importance of indoor air quality has never been in doubt, with mechanical ventilation and heat recovery (MVHR) systems playing a key role in providing homes with a constant supply of fresh air. However, designing ventilation systems to cope with rising levels of outdoor pollution and nitrogen dioxide is becoming a major issue for specifiers.

Air pollution is defined as 'the release of particles and noxious gases into the atmosphere' – such as those created when burning fossil fuels, including petrol and diesel. One of the main pollutants of concern is nitrogen dioxide (NO2), which can be detrimental to people's health. It can cause respiratory problems, susceptibility to infections such as bronchitis and, in some cases, even heart disease.

From a specifier's perspective, it is becoming imperative to design cost-effective ventilation systems to cope with the increased potential for air pollution. Consequently, MVHR manufacturers, such as Titon, are continually looking to develop products to help combat such pollutants and improve air quality.

In London alone, it is estimated almost 9,500 people die each year because of air pollution, with most fatalities linked to NO2 and emissions from diesel vehicles. Various indoor sources of NO2 have also been identified, including gas cooking, solvents that slowly seep from plastics, paints and furnishings, as well as air fresheners and even gas boilers. This provides significant cause for concern as, according to the Building Research Establishment, the average European citizen spends at least 90% of their time indoors.

So, what can be done to address this issue? Firstly, we know that MVHR systems are particularly suitable for newbuild properties and, as UK housebuilding moves forward, these systems will be increasingly specified into newbuild houses and apartments, due to their ability to remove moisture and pollutants from the air, ensuring a comfortable – and healthy – indoor environment.

In cities and urban areas where NO2 is on the rise, dedicated filters can be added to an MVHR system to combat the pollutants found in exhaust gases from diesel engines. Products such as the Trimbox NO2 Filter from Titon incorporate balanced flow technology, reducing NO2 levels to an acceptable mean concentration level of 40µg/m3, while improving indoor air quality. Independent tests at a UKAS-recognised test house have demonstrated such units to absorb 95% of NO2 both in normal, continuous ventilation mode and also at boost or higher ventilation rates.

NO2 filters are highly effective in reducing pollutants in urban homes (including sulphur dioxide, hydrogen sulphide, hydrogen chloride and chlorine), as well as reducing the risk of Toxic Home Syndrome and the ailments associated with air pollution. They also perform well against ammonia odours. Plus, as with other impregnated grades of activated carbon, filters will also absorb contaminants such as volatile organic compounds (VOCs) and solvents.

From a legislative perspective, it is important any installed NO2 filters conform to EU Directive 2008/50/EC (aka the Clean Air for Europe programme or the CAFE Directive). This programme was launched with the aim of developing a long-term, strategic and integrated policy to protect against significant negative effects of air pollution on human health and the environment. Filter units also need to comply with Part F (ventilation) of the Building Regulations.

Using filter units with compact designs enable them to be installed in both intake and supply ducting. Plus, if they are capable of working with variable airflow, units can be used in both small and large dwellings.

With people spending more time indoors, it is vitally important to use effective MVHR systems in conjunction with a suitable NO2 filter to ensure pollutants – and predominantly exhaust gases from diesel engines – are effectively reduced. Installers who specify such products and systems take another step forward in the quest for healthy homes and a high standard of indoor air quality.