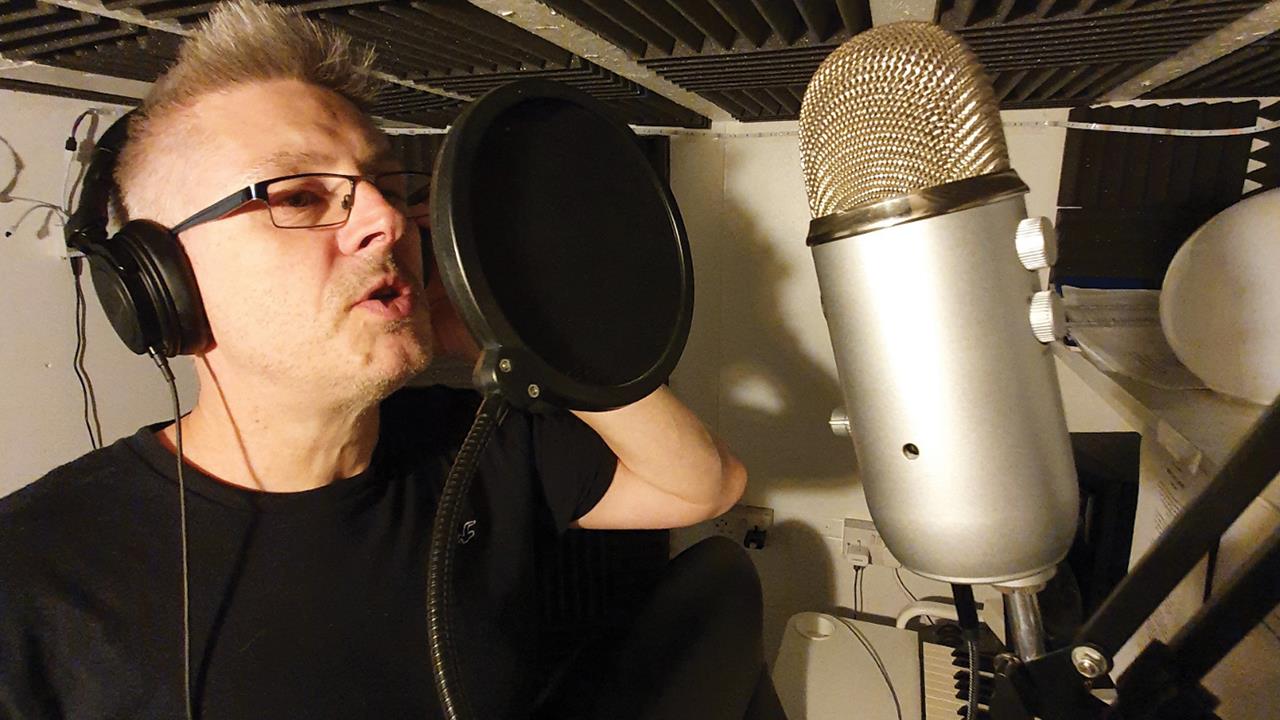 Bathroom fitter Kev Crane’s life was turned on its head when a chance encounter in a customer’s home led to a record deal, and now a movie. Kevin Stanley spoke to him for HVP to find out more about his newly-found fame and his plans moving forward.

Kev Crane is the singing sensation that has hit the headlines since being discovered while fitting a bathroom for a record producer in the summer of 2021. Since then he’s released his 80s-inspired, debut album and has a film in the works. This is one plumber that got lucky.

Singing on the job

Crane lives with his wife, Karen, in the village of Quorn, Leicestershire. He’s been a bathroom fitter for eight years, and was discovered as a singer while on a six week job to install three bathrooms in a house in Loughborough. He happened to be at the home of New Reality Records owner Paul Conneally, who heard Crane singing along to 80s new wave band Talking Heads’ 1983 hit, Burning Down the House. Far from being nervous about the song’s lyrics, Conneally asked Crane to send him demos.

Crane always sings while he’s working, that is assuming that his customers don’t mind, and he always asks permission. However he never expected to be heard by a record producer, and even when he was, and Conneally showed an interest, he was unsure of what might happen. “I never really thought anything serious would come of it, especially at my age. I’m 50, I’m the oldest crooner in town,” jokes Crane.

Good to his word, Conneally believed enough in Crane’s talent to offer him a record deal and the two set about working to produce and record the singer’s debut album – Why Can’t I Be You? – an eight track LP of original songs all written by Crane himself.

During lockdown, Crane converted the cellar in his house into a sound-proofed recording studio. Determined to record some music of his own, he learnt to mix tracks by watching YouTube tutorials. He humbly admits to the fact that his debut offering is not a professionally produced record. “I did all the work on it myself in my homemade recording studio. But it was something that I wanted to achieve and I’ve done it. And I’m proud of that,” he says.

Back to where it started

Singing has been in Crane’s life for decades. In the late 80s, Crane was studying at college, listening to the likes of Depeche Mode, Simple Minds, and New Order – all bands he credits as his influences – when Human League came on the radio and he and his best friend instantly decided to start a band. The pair took keyboard lessons with a local teacher for a while before the teacher noticed that Crane actually had a talent for singing.

Crane and his teacher eventually formed a duo and performed on the local pub and club circuit. By day, Crane was now working for a local upholstery company, but evenings and weekends he was out on the road, covering the staples of the 60s, 70s, and 80s.

He tried out for the TV talent shows of the 1990s and early 2000s, and, despite getting through the opening round of auditions for Matthew Kelly’s Stars In Their Eyes (he would have been Jim Kerr from Simple Minds had he made it to TV) and Fame Academy, he never quite got his big break.

“The first audition [for Fame Academy] was literally in the street, you had to sing a few lines, and if they liked it you moved onto the second stage,” explains Crane. “The next minute I was standing on an ‘X’ in the studio in front of producer Steve Lillywhite.” But once again something didn’t quite click and his dreams of stardom were thwarted.

By his late 20’s, he’d all but quit the music scene; the need to hold down a steady job, at least temporarily, quashing his ambitions of becoming a professional singer. Alongside his day job, he’d begun to renovate houses, before another spanner in the works came in the form of the 2008 economic crash. Crane found himself being made redundant and out of work.

“I was signing on for unemployment benefit. I couldn’t stand it. It felt horrible, so I decided to do something about it.”

While renovating houses, he’d learn some trade skills and decided that he liked plumbing the most, so he enrolled on a plumbing course in Nottingham. “I ended up fitting bathrooms for Bathstore, and later doing remedial work for B&Q, before finally setting up my own business, ‘Bathrooms By K’, and becoming my own boss.”

Despite the return of music in his life, he still enjoys plumbing. “I’m still fitting bathrooms and putting tiles on the walls. I’m busy, I’m booked up solid until summer,” says Crane. “I may get someone to do the tiling for me in the future,” he adds, with a laugh.

The media hype around his story has been substantial, with TV appearances on This Morning being interviewed by Phillip Schofield and Holly Willoughby, and an interview on Channel 5. Local newspapers, national broadsheets, and radio stations have also been keen to tell his tale.

His first three singles; He Promised You The Earth – a song about the lies that Boris Johnson has told us; Robots and Machines – a track about the monotony of clocking in and out of work in a mundane job; and You Don’t Have To Live Like This – a song about sitting on the sofa, surfing through TV channels, have done well, and he’s now recording more new material.

“I’ve been really lucky to be in the right place at the right time, but I know that there are other plumbers and tradespeople out there who play guitar or drums who are just waiting to be discovered,” says Crane.

“If you enjoy it and that’s what you want to do, then do it! They’ve got big dreams, just like I had, and they can do it as well. If you don’t have a dream, how are you ever going to have a dream come true?”

Crane has weathered some online sniping, but if people are jealous that he’s found a level of success, he feels no anger towards them.

“You get the haters online, but to be honest I just don’t listen to it. If you have something in your life that you are not happy with, you should do something to change it, rather than having a go at someone trying to better themselves. I think, it doesn’t matter who you are, you should make time for people and treat them with respect,” says Crane.

Since striking it lucky, Crane has signed a film deal with Los Angeles-based filmmaker Stacy Sherman Ray and her husband, screenwriter and producer Billy Ray – best known for writing the screenplay for The Hunger Games. Sherman Ray contacted Crane via Instagram and they have since been in contact via Zoom calls across the Atlantic to hash out the details.

The film will be called The Music Inside and the script has already been written by Dick Clement and Ian La Frenais – two giants of the British sitcom scene. The pair are the perfect choice having not only written Porridge and The Likely Lads, but also 80s hit Auf Wiedersehen, Pet, which focused on a group of seven construction workers that left the UK for Germany to find employment bricklaying on a building site in Dusseldorf.

“Dick and Ian wrote some of my favourite films and TV shows from my youth like The Commitments, Porridge, and Auf Wiedersehen, Pet. I’ve met them both on video calls from Los Angeles and we’ve talked about the film and the script.”

This brings the story full circle in a way, as Jimmy Nail, who starred in Auf Wiedersehen, Pet, went on to become a singer-songwriter and had several hits, including Crocodile Shoes, and even a number one hit Ain’t No Doubt, an accomplishment that Crane hopes one day to emulate.

Crane is already auditioning stars to play him in the movie (if only so far in his imagination) and the shortlist includes the likes of Stephen Graham (who lives in Leicestershire, just up the road from Crane in Ibstock) and Simon Pegg. Slightly more fanciful options include Jude Law, Colin Firth, and Jason Statham.

Ever the realist, Crane is philosophical about the financial rewards of his newly found fame. “The money is in live events, getting out, and playing shows, I’m currently in talks with an agent about making that happen. There will be income when the film is released, and it could be a substantial amount, but I’m not very materialistic,” he muses.

So far he’s thought no further than the ability it could give him to pay off his mortgage and to build an extension on his house. He was even nervous of what the neighbours might think when he recently bought Karen a new car – despite the fact that her old car “blew up”.

Crane says that he never expected this to happen and so he has no expectations: “I’d love to be able to sing full time, but that all depends on how everything goes… fingers crossed!”

But with a record deal in the bag, a debut album released, and a film of his life in the works, it looks like his adventure isn’t going to end anytime soon.

Jim Kerr once famously sang Don’t You Forget About Me – it may have taken Crane a while to get to this stage, but it looks as though no one will be forgetting about him any time soon.

INTERVIEW PLUMBERS
Tweets by HVP
Make sure you’re on top of changes in the industry, and sign up for free to receive your monthly copy of HVP and our weekly email newsletter
SUBSCRIBE TO NEWSLETTER
SUBSCRIBE TO MAGAZINE