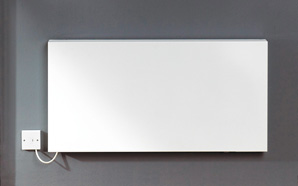 Electric heating systems are now beginning to establish a stronger foothold in the UK market, having proven popular in Europe for many years, says Gareth Charles. Here, he looks at some of their features and benefits

Electric radiators have many advantages. They are safe, reliable and suitable for those areas where it is not viable to extend or install a central heating system. Simple and fast to fit, they can be sited almost anywhere in a property, with larger units capable of warming sizeable rooms with ease.

In today’s austere times of rising fuel bills, I believe electric heating systems can present a sensible and economical alternative to gas and oil. They can also be retrofitted independently from any existing hot water system, removing the need for additional pipework or a higher output replacement boiler.

There are certainly plenty of electric radiators currently on the market, as well as a solid demand for them. Models range from the standalone to those that can be wirelessly linked together in series. Visually, the latest modern designs are a far cry from the unsightly, dimpled panels and cumbersome storage heaters of yesteryear. A variety of all-electric or dual-fuel towel rails are also available, each capable of heating an entire bathroom as well as towels.

In terms of versatility, electric radiators can be fitted in a wide array of applications, as they are suitable for apartments, houses and offices alike. There is no need for annual maintenance or servicing (unlike traditional gas systems), helping to ensure low and manageable running costs. In addition, as most of the electricity used by these products is turned into hea, energy efficiency levels are high.

No pipework or boiler is required for electric radiators, in fact the majority simply need to be wall-mounted using a bracket and positioned near a 13A socket, or via a fused spur. This is of particular benefit if units are fitted in areas such as an attic or conservatory, where it could prove expensive to link them to a traditional system. Such ‘plug and play’ simplicity also enables the system to be switched on and programmed according to end-users’ requirements.

Installing a new electric heating system can be quicker when compared to fitting a wet version. Also, should the fabric of a building change at a later date – for example, with the addition of an extension or conservatory – extra electric radiators can be added to the system accordingly.

There is a wide selection of modern electric systems available, with convectors, fan, panel and radiant variants being the most common. Wall-mounted electric radiator systems, specifically, can offer high levels of control and heating that are equally as effective as their traditional wet counterparts.

As each emitter has its own controllable element, the whole system can be connected together, linked to a central room controller and programmed to meet end users’ specific heating needs. Any wiring requirements can be taken care of during the first fix.

Should wiring be an issue, however, wireless electric radiators (including MHS’ own Voltec range) are also available. These are becoming increasingly popular – especially in newbuild projects – due to their slimline design and fully programmable radio frequency (RF) controls. This latter feature allows for the system to be divided into zones, automatically turning the radiators on and off according to the temperature requirements of each zone. This saves energy as a result, as no heat is wasted warming unused rooms and areas unnecessarily. Extra radiators can be added at any time and simply linked to a zone via the RF control.

The appeal of electric radiator systems, therefore, can be attributed to their many advantages, particularly cost effectiveness and ease of installation. Add superior levels of control to the mix and it becomes apparent they can offer an energy efficient form of heating, with the added benefit of few siting restrictions.

Given that electric designer radiator systems can match the performance of a standard wet central heating system – while being simple, economic and quick to install – it seems likely they will remain a popular heating choice.