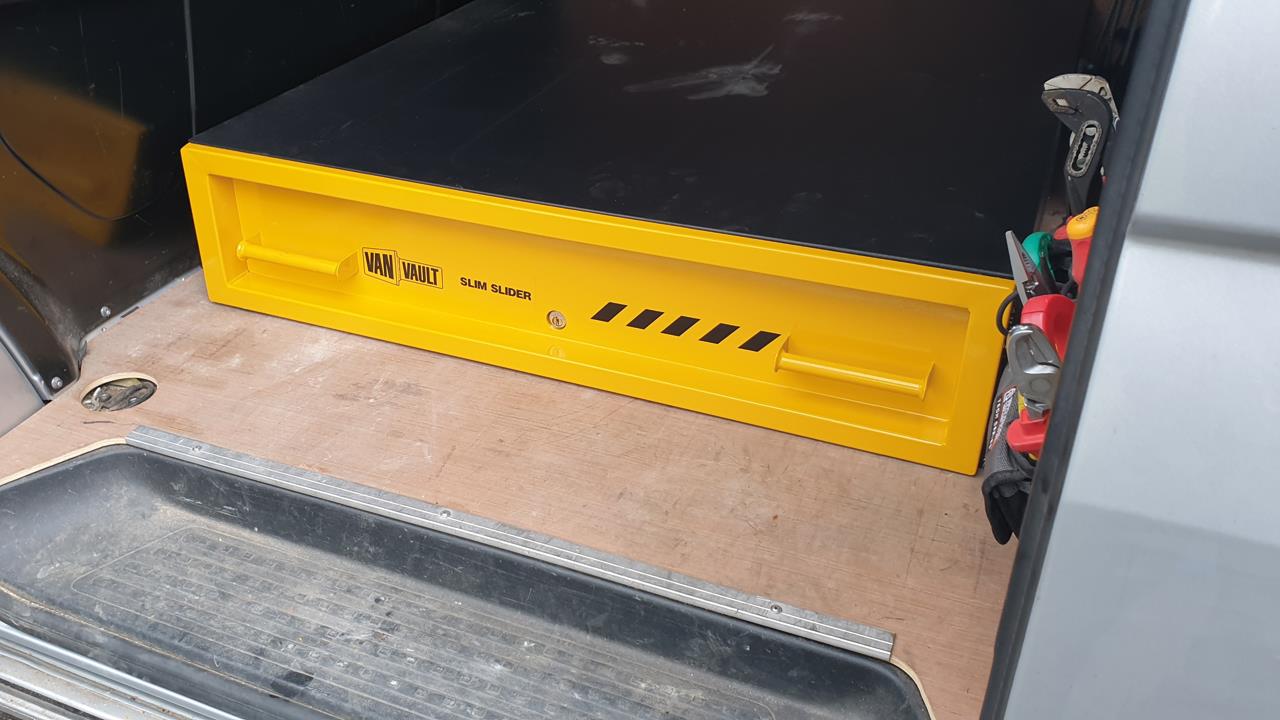 HVP recruited Lee Brown of Peak Heating to test out the new Van Vault Slim Slider. Here he shares his thoughts on whether it’s tough enough to protect your tools from thieves.

Lee Brown of Peak Heating, based in Huddersfield, has been working in the trade for approximately 20 years. He has been fortunate enough to never have been a victim of tool theft, but it is a major concern for his business.

He explained: “I’m that concerned about it, I haven’t even had my van sign written this time round, I’ve left it plain. I don’t have a pipe carrier on top, so it doesn’t stand out as a plumbers’ van, instead I have a roof rack that clips on and off if I have to take my ladders anywhere.”

A Trade Direct Insurance survey from 2017 of 1,000 tradespeople found that tool theft is the main financial concern for those working in the trades. The same survey also reported that the average insurance claim for tool theft is around £1,200 so, if your tools are stolen, it’s likely to cost you an arm and a leg.

“I’m a great believer in making [the van] as secure as I can, so basically sending them elsewhere to an easier target down the road,” explained Lee.

As Lee recently purchased a new van, a Volkswagen Transporter, it was an ideal opportunity for him to test out the new Van Vault Slim Slider.

The Slim Slider is a secure storage drawer, designed to be installed in a van to safeguard the possessions within from theft. The product features a solid steel body with anti-corrosion protection, and is fitted with a 70mm anti-pick, anti-drill and anti-rust stainless steel disc lock. It is also certified by Secured by Design, the UK Police-approved standard.

When we spoke to Lee to summarise his experience of the product, he had been using the Slim Slider for about three weeks. Installation was straightforward, he says – the product features floor mounts, which sit between the wheel arches, as well as pre-drilled fixing points for easy installation to the vehicle floor.

Lee does a lot of work in the commercial sector and carries some seriously major kit in his van. “I have some big pieces of kit like circular saws, ripsaws, things like that,” he said.

“I looked at [van security products] before and I thought, other than the chest option, you’re very limited. But with this one, everything’s fitted in it.”
Lee explained that he is fortunate enough to be able park his van at home on his driveway, relatively securely, as he lives in a secluded area. However, it is when he is out on jobs requiring him to park in unfamiliar areas where he is most concerned about vehicle break-ins.

“A month ago, I was working up in Scarborough for about three days, so it had to be parked on a public car parking space overnight, while I stayed in the hotel,” he said. “I’ve felt better with a Van Vault being there since then, definitely.”

Lee was also impressed with durability of the product, which compared favourably to a secure tool storage solution which came with one of his previous vans: “I could tell the difference between this one and the old one straightaway. It’s definitely a strong product because I’ve stood on top of mine getting in and out of the van, so the strength is fantastic.”

He’s also hopeful that, now he’s got a Van Vault installed, it could also result in a reduction of insurance premiums for the vehicle.

“When we got the dash cameras in our vans, about five years ago, I mentioned it to my insurance broker in passing and a couple of days later I found out that it had knocked £80 off [my insurance premium].

“It should be something that people look into mentioning to insurance companies and say, ‘I’ve actually got a secure safe on my van – I’m going that extra yard’, and maybe see if the insurance company can get on board with it.”

The Van Vault Slim Slider weighs 77kg without tools, so the only concern for Lee was the additional weight that it added to the vehicle, resulting in additional fuel costs.

He explained: “Working around the country, I have to get the compromise right between security and fuel costs. But if you asked any engineer what they’d rather have – the security of knowing your tools are safe, or a couple of pounds saved on your fuel bill at the end of the year – you’re always going to go for tool security.”

With tool theft on the rise, gas engineers need to step up to take responsibility for protecting their vehicles, and a Van Vault is one good way of doing that, according to Lee.

“These people follow the vans around, they watch them on-site. And I know that if I was that way inclined and I looked at someone’s van and they slid a Van Vault out, I’d drive off and find something that didn’t have one.”

Overall, Lee is very happy with his Van Vault Slim Slider. He said: “Now I’ve got one, if I was to swap the vans, I would certainly go out and buy another. It’d be the first thing I’d put on the van before anything else.”

LEE BROWN PEAK HEATING PRODUCT REVIEW SECURITY SLIM SLIDER THEFT TOOLS TRANSPORT VAN VAN VAULT
Tweets by HVP
Make sure you’re on top of changes in the industry, and sign up for free to receive your monthly copy of HVP and our weekly email newsletter
SUBSCRIBE TO NEWSLETTER
SUBSCRIBE TO MAGAZINE