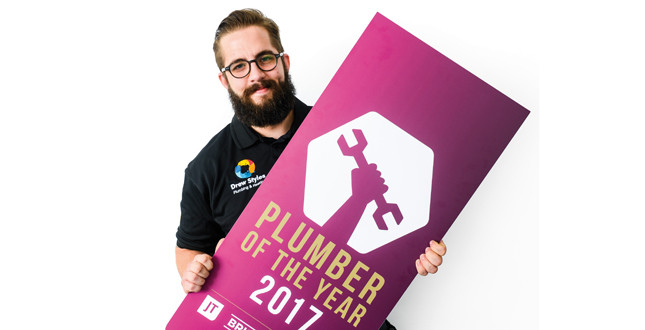 HVP’s Tom Hogarth tracked down Drew Styles, fresh off winning UK Plumber of the Year, to talk about how he got to where he is, and how he continues to improve himself and his business.

Drew Styles, a fourth generation plumber from Lancashire, was recently announced as UK Plumber of the Year 2017, in a nationwide competition run by JT, Bristan and Wolseley Plumb Center.

Despite all of the attention Drew has been getting in the media, on Twitter and from people throughout the industry at trade events like the PHEX exhibition in Manchester, he remains entirely focused on his work and his customers.

“It was weird because I wasn’t sure whether to be happier about the competition, or about fixing the boiler I’d been working at for a few weeks,” he said.

Then again, it’s a career he loves and has wanted all his life. Hailing from a long history of plumbers, Drew took on his first job at age six, helping out his Grandad! He’s come a long way since then, and has been working for himself for the past two years.

Drew said that he relished working on his own, having the ability to do things his way, choose the products he wants and achieve the best standards that he can. He said: “I like to do things the right way, and when you’re working with other people you can’t necessarily do it the way you want.”

Drew is always trying to learn better ways, new tips and skills. Twitter has been invaluable for him in this respect, joining the now thriving community of installers around the same time he went out on his own.

He said that being able to learn from the range of experienced engineers is the best part of the community, but that he also values the ability to stay in touch with and quickly contact manufacturers.

“My work wouldn’t be where it’s at if it wasn’t for the people I’ve met on Twitter,” explained Drew. “You’ve got people like Wayne Kirby and Den Hollingworth, they’re the benchmark for installation if you ask me. Nobody can touch them for work quality.”

Being part of the community has also afforded him the chance to work on fantastic charity projects and installations with some of the best engineers in the country. Working with the Heroes of Heat and on projects like #DIYSOS means a lot to Drew not only as a way to give back, but also to learn from so many other talented installers and tradespeople.

These opportunities and inspirations drive Drew forward to improve himself and get to where wants to be. Winning Plumber of the Year is just the beginning. Drew hopes to expand his business in the future to focus on the work he really enjoys, such as boiler installations and, interestingly, installing Nest controls. He said: “I want to be the UK’s leading Nest installer, because I genuinely think it is the best bit of kit on the market.”

However, while he won’t shy away from recommending what he believes are the best products on the market, Drew is a long way from blaming the product for things going wrong: “Every product has its place. There’s no such thing as a bad boiler or a bad thermostat. If you fit it properly, and do the job right, anything will work.

“Of course, if it’s a cheap product then it’s not going to last but it will work. It just depends on the customers’ needs.”

Drew may have just won Plumber of the Year, but it’s clear that he has a bright future ahead of him thanks to his passion, dedication and the support of a wide-ranging and inspirational community both on and offline.