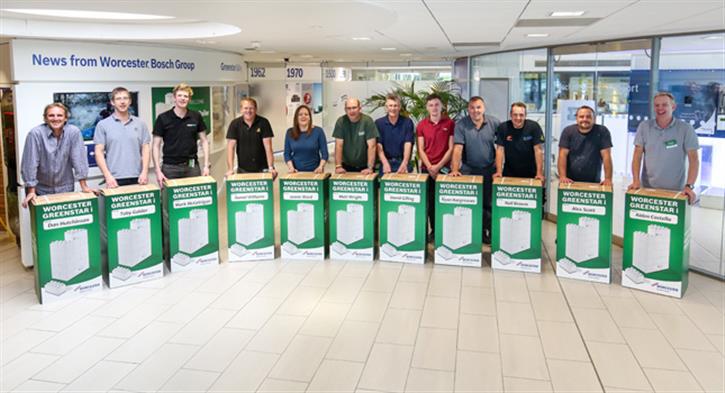 Nine lucky installers have come away from Worcester, Bosch Group with a brand new boiler made by their own fair hands, after testing their skills on the manufacturer's factory floor.

As part of its first ever 'Build a Boiler' competition, Worcester invited the winners to experience its manufacturing process first-hand as they constructed their very own Greenstar i boiler. The installers were taken to one of the manufacturer's four 'lean' assembly lines and given the chance to get hands on with the 623 parts and 441 process steps that go into every one of its boilers.

The winners then worked against the clock in a final manufacturing challenge, with the time closest to Worcester's production line standard of 120 seconds also winning a Wave internet-connected controller. The day concluded with a tour around the company's all-new factory and facilities, where they were offered a glimpse into the manufacturing journey from part to product.

Neil Brown, of Neon Heating and Boiler Services in Hereford, said: "I do servicing for a living, so to come on the production line and get my hands in there was great – I loved it. Normally I install Greenstar CDi Classic boilers, so now when I come across a Greenstar combi boiler, I’ll know exactly where everything is."

Swansea-based Dan Williams of DW Plumbing & Gas Services, added: “It was really good, and very informative. What the guys do on the assembly lines is unbelievable. Just seeing all the materials go together and the numerous tests each product goes through was fantastic.”

Matt Wright of Matt Wright Plumbing & Heating, near Leamington Spa, said: "I found it very interesting. I used to work for another boiler manufacturer, so to see how differently the boilers are built was brilliant. The fact that I knew when we packaged the boiler up that I’d made it, and it was going to go in my house, was very exciting."

Martyn Bridges, director of marketing and technical support at Worcester, said: "We want installers to feel special whenever they come to our headquarters for training or a site tour. This was a fantastic opportunity to do just that, while inviting installers to take a look at the extensive checks and manufacturing processes that go into all of our boilers."

Installers who would like to experience Worcester's factory and facilities tour themselves can register their interest at www.worcester-bosch.co.uk/factory.