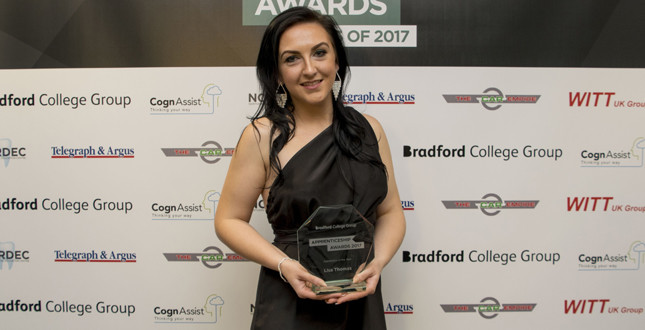 Apprentice plumber Lisa Thomas has been named Apprentice of the Year by the Bradford College Group, one of the largest providers of apprenticeships in Yorkshire.

Lisa was awarded the grand prize after winning the Level 2 Apprentice of the Year title in the construction category earlier that night.

She said: “Winning was overwhelming, I am so humbled. It means so much to me to win and to set an example to my children, other single parents and young women. I was interested in construction when I was young, but I didn’t pursue a career within the industry as I feared it was too male dominated.

“I couldn't have got through the past two years without the support of City Training Services, Bradford College and my managers John Bramall and David Luttrell and the rest of the property services team at Connect Housing. They have been amazing!”

Lisa was named Apprentice of the Year ahead of 30 other apprentices who had picked up prizes for being the best apprentice in their chosen discipline. The range of subject areas recognised included business, construction, engineering, dental nursing, pharmacy, childcare and hairdressing.

Judges praised Lisa, saying: “Lisa balanced the tricky demands of full-time study and family life exceptionally well. She completed her apprenticeship early and passed all of her exams with flying colours.”