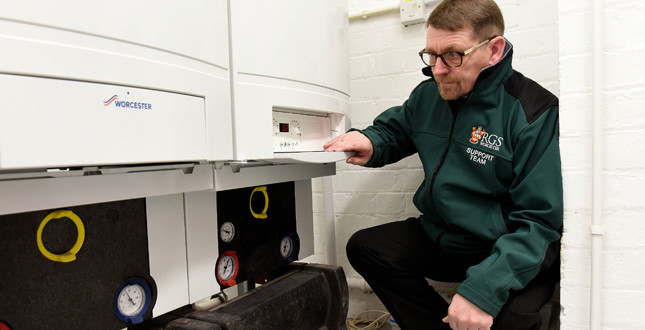 As part of an extensive sustainability programme and after suffering several legacy boiler failures, Royal Grammar School Worcester required a reliable and efficient heating solution across its seven plant rooms. Bosch Commercial and Industrial stepped in to help.

The heritage of Royal Grammar School Worcester means there are certain challenges when incorporating energy efficient technologies within buildings dating back as far as the 19th century. Having opted to enhance its sustainability credentials and replace a poor performing heating system, the school needed to tackle the integration of new boilers across its estate while using its pre-existing pipework. As an added complication, the replacement of the aged heating boilers and systems needed to be completed over the six-week long summer holidays before term time commenced.

After two initial boiler breakdowns at the end of 2014, where the school had to rely on electric heaters during term time, Bosch Commercial and Industrial were approached to carry out a review of the estate and identify other areas of risk. Many of the existing boilers were legacy boilers over 15 years old so would be costly to repair, if they could be restored at all, and were not in line with the school’s ambition to improve energy efficiency and futureproof its estate. Overall, it was decided that 21 high-efficiency condensing boilers would be installed across seven critical locations, with each plant room presenting its own challenges.

Bosch recommended its GB162 boiler, as its compact dimensions made it especially suitable for the plant rooms, many of which were difficult to access and were restricted in space. The range of outputs available, and the option to cascade, also meant that the school could cater for different heat demands across different areas of the site.

One of the key challenges of the project was the old and corroded pipework system, which had the potential to affect the operation and efficiency of any new heating appliances. To overcome this, a plate heat exchanger was installed to provide two elements of protection and to separate the old and new systems.

Work commenced on-site on 13 July 2015, and was concluded successfully on 21 August 2015. Due to the boilers being fitted in the summer holidays, the school has already experienced its first winter with the new system in place and has seen improved control. The complex nature of the ongoing sustainability project means that the situation remains under review. With plans to replace other legacy equipment on-site, upgrade to solar technology, LED lighting and secondary glazing, and to improve insulation, the school is expecting significant energy savings in the long term.

Lance Blackburn, Commercial Technical Manager for Midlands and North Wales, at Bosch Commercial and Industrial, commented: “It is great that we have built such a strong relationship with RGS Worcester and that we were the first company to spring to mind when there were problems to solve. The GB162 was perfectly suited to the site due to its flexibility and energy efficient characteristics, and with the school’s commitment to investing time and money to make changes in line with its sustainability programme, it is set to maximise on the benefits of the new installations.”