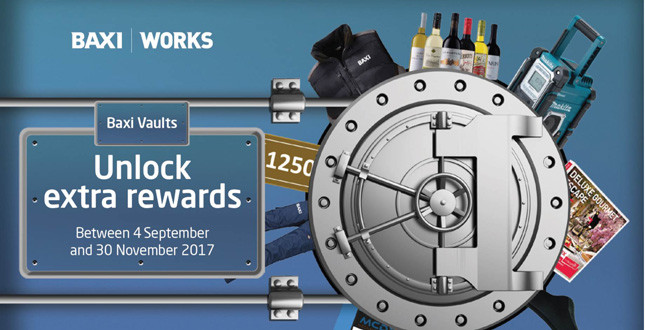 After a successful campaign in 2016, Baxi is running its winter Works promotion for the second year in a row, with even more rewards ready for the taking.

Installers who register between three and nine eligible Baxi boilers – including the Baxi EcoBlue range, Platinum Combi HE boiler, and the Baxi 200 and 400 Combi and Heat only boilers – before 30 November 2017 will be able to select from a range of extra rewards, from experience days to various power tools, and more.

The rewards can be unlocked via virtual ‘vaults’, with installers being granted access to a particular vault depending on the number of boilers they have registered through Baxi Works within the three-month promotional period.

In total, there are three vaults: installers will need to register three boilers to unlock the Bronze Vault; six boilers to open the Silver Vault; and nine boilers to access the Gold Vault.

Rewards inside the coveted Gold Vault include a case of wine, a luxury experience package for two, office and website package from Expert Trades and a bundle of Baxi-branded Dickies workwear – with a multitude of other goodies up for grabs in all three vaults.

Furthermore, throughout this year’s promotional period, Baxi will offer Works installers double points for every eligible boiler which is registered after unlocking the Gold Vault.

David Cook, sales director at Baxi, said: “Giving back to our loyal installers is a top priority for us, and after the success of last year’s vault themed promotion, we are delighted to run the scheme again, with even more rewards available to claim.

“With winter being the busiest time of year for installers, this is the ideal opportunity for our Works members to gain that little bit extra – we wish our installers all the best this heating season.”

Each boiler must be registered through Baxi Works. The extra rewards will be available to claim online between 1 December 2017 and 31 January 2018.