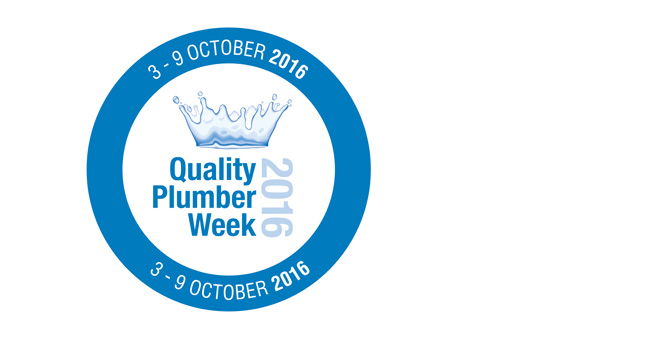 Installers are being encouraged to come together to support the annual Quality Plumber Week campaign, which takes place from 3 to 9 October, 2016.

Organised by The Association of Plumbing and Heating Contractors (APHC), the third annual campaign will be returning this October to celebrate the work of the UK's professional plumbing and heating installers, emphasising the vital role they play in our communities.

The week will also be encouraging more school leavers to enrol on a plumbing apprenticeship as a route into a respected and future-proof career, with 86% of people surveyed by APHC believing that young people should be encouraged to consider an apprenticeship as an alternative to university.

With less than a month to go until the launch of the campaign, plumbers can pledge their support and shout about their quality with downloadable resources from the Quality Plumber Week area of the website, including a template release for plumbers and suppliers to distribute to their local press, suggested social media links, plumbing factoids and more information.

During the week, APHC will also be running a Mega Trade Giveaway, encouraging installers to retweet any APHC post or tweet about why they're backing #QPW16 to be in with the chance of winning a fantastic bundle of prizes at the end of the week. One lucky winner will become the proud owner of an AKW Wetroom Kit, an ADEY MagnaCleanse Kit, a Worcester Bosch Professional Cordless Hammer Drill, a Vokera BeSMART thermostat, a Klober Wakaflex roofing flashing roll, an Intatec Puro Bar Shower and Overhead Kit, a Sharkbite Starter Kit and Merlyn Ionic Express Shower Enclosure.

John Thompson, chief executive at APHC, said: "We've been delighted with the support Quality Plumber Week has received in previous years and are encouraging the industry to come together once again this autumn to ensure our 2016 campaign is the best one yet. We hope installers will take this opportunity to celebrate their professionalism while also encouraging the next generation to follow their footsteps by taking on an apprenticeship in this skilled and well-respected trade."

More information on Quality Plumber Week can be found online at www.aphc.co.uk/quality-plumber-week.asp