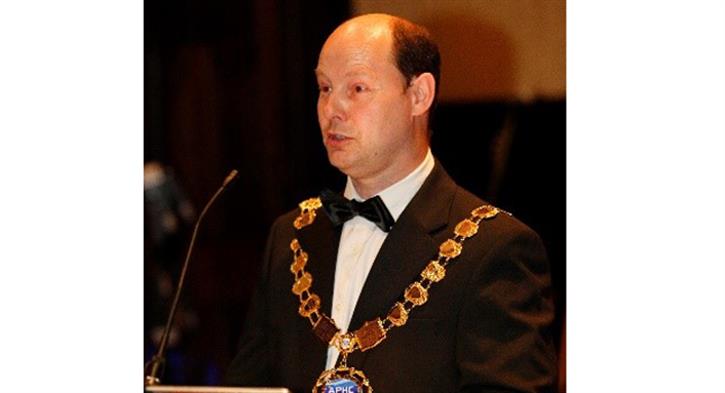 The new president of the Association of Plumbing & Heating Contractors (APHC) has stated his aim to improve trade arrangements for the industry’s small businesses.

John Jones, of Conwy, Wales, officially accepted the role at the Annual President’s Dinner, hosted at Crewe Hall Hotel, Crewe, on Saturday 13 June. He has been a member of trade association APHC since 1994, becoming a board member in 2009, and is currently lead engineer at Clwyd Heating Renewable Energy Services (CHRES).

Mr Jones has been in the plumbing and heating industry for 31 years, starting his apprenticeship aged 16 on the government-backed Youth Training Scheme. He then spent five years with local companies before setting up his own plumbing and heating business. Here he began to install renewable heating solutions such as rainwater harvesting systems, heat pumps, solar and biomass boilers.

In his inaugural speech, Mr Jones outlined what he saw as a range of key priorities to bring about better trading conditions for plumbing and heating contractors in the industry, including:

· streamlining the qualification process to be less onerous on small businesses;

· the standardisation of reporting defective work to protect consumers as well as eliminating bad workmanship;

· the need for a greater number of experienced field inspectors to improve policing of the industry.

He said: “During my time I’ve seen many changes from increasing quantities of paperwork, competence schemes, green initiatives and basic changes in the technology and IT we employ in our everyday work. What is clear is that it’s never been more important to be a part of a trade association to keep abreast of these changes.

“I am passionate about the plumbing industry, especially concerning the smaller businesses, which I feel are put under too many onerous paper trails and directives from government and Europe. I’m looking forward to my year in office and to meeting the many industry leaders in construction with who I can debate solutions to achieving improved trading conditions for plumbing and heating businesses.”

Mr Jones’ wife Debbie, sons David and Matthew, plus nephew Alex, are all involved in the running of CHRES, which is based in Colwyn Bay. The company is registered with GasSafe, the Microgeneration Certification Scheme and the Renewable Energy Consumer Code.

Mr Jones shares a passion for motorbike racing with his sons and is currently leading the Golden Era Superbike Championship as part of the Wirral 100 Motorcycle Club, competing on his Kawasaki ZX7R.