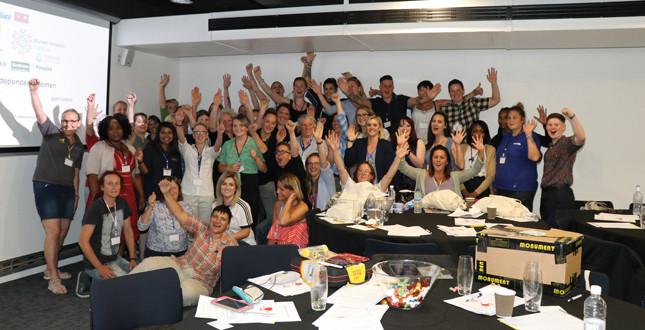 Tom Hogarth reports from the Women Installers Together Conference, where female plumbers and gas engineers gathered together to celebrate each other and drive the industry forward.

While it could be easy to focus on the big negative takeaway from the Women Installers Together (WIT) Conference – that there are so few female plumbers and gas engineers in the UK – it’s not hard to see the positives right alongside. While they are few in number, women in this industry represent some of the hardest working and most determined of tradespeople.

Held at the Building Centre in London and organised by Stopcocks Women Plumbers, the second annual WIT Conference hosted even more visitors than its previous year. The event was also supported by a wide range of industry sponsors, from Graham Plumbers’ Merchant to Vaillant, who set up stands to talk to visiting tradespeople about their products and opportunities, as well as donate prizes for a raffle later in the day.

Hattie Hasan, Founder of Stopcocks and inspiration behind the event, said: “To see so many women plumbers and gas engineers, and receive their fantastic feedback, was really uplifting and highlights the importance of this event. Getting such enthusiastic support from the sponsors shows how relevant the WIT conference is to the industry as a whole.”

The event programme opened with Jazz Jones, Learning & Development Business Partner at Polypipe, conducting a seminar on the benefits of emotional intelligence both in a personal capacity and a professional one.

The seminar featured an interactive quiz where attendees could find out how well they are currently maximising their communication with others.

Visitors then heard from Anna Hemmings on overcoming adversity and the challenges that life throws at you. Anna is a two-time Olympian, six-time World Champion, and arguably Britain’s most successful female kayaker.

She broke down her approach to overcoming emotional and physical adversity to succeed again and again despite the odds, a situation many in the room find themselves in as they push to succeed in an industry that often refuses to recognise their skill and experience.

Before moving on to the raffle and networking, Hattie spoke briefly about her journey to establishing Stopcocks and the conference itself before cutting herself short to hand the mic over to a few influential women who are making great strides in the industry.

During this ‘Famous for Five Minutes’ segment, three attendees got the chance to speak a bit about their journey so far, hopefully inspiring a few in the room to continue on despite the difficulties, or take the plunge into the next stage of their career.

Daisy Sharples spoke first, outlining her path to where she is now, on the verge of becoming a plumber at 17 years old, under the guidance of Hattie herself. She shared some of her experiences, which mirrored Hattie’s own and shone a light on how much the industry has failed to change over the last few decades, despite some improvement.

Up next was Ruth Pollard, who talked a bit about her unique path as a gas engineer and how she is trying to do her bit to encourage more women into engineering and construction, as well as specifically heating and plumbing.

Finally, Lauren Winter took the stage to share her story of discovering a new career and working hard to provide for her daughter, becoming part of the community along the way and now cresting the hill of completing her training and starting to work full time as a plumber.

Lauren said: “Attending the WIT Conference meant a lot to me, as it meant I got to meet many likeminded individuals and people with the same desires and wants as myself. Being a female in a male-dominated trade can be daunting, but expanding my support network with female tradespeople really gave me a boost. I believe it’s important that these events go on and raising the profile of such days can only be a good thing to promote our industry and hopefully encourage more girls into the trade.

“My highlight of the day has to be having the opportunity to speak to a room of amazing people to share some of my journey. I was scared, but had to go for it as I was honoured to have been given the chance by Hattie.”

She concluded: “I have a dream to one day be able to employ a female apprentice, and can only hope that it’ll be my daughter who joins me. Being able to speak to companies such as Graham, Vaillant, Monument Tools, and Polypipe was also a great asset on the day.”