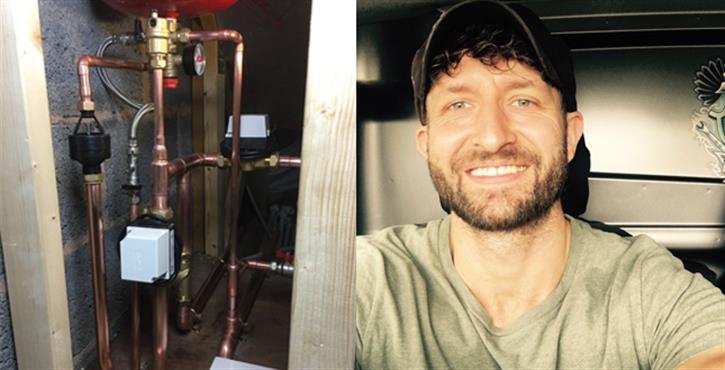 HVP spoke to Peter Booth, more commonly known as @pbplumber on Twitter, to find out how he got to where he is today and what he’s doing to make the industry better for other reputable installers.

Peter Booth is a third-generation plumber, but the first in his family to explore a new side of plumbing through social media. Originally just tempted to pop a few pictures of his work online for other tradespeople to check out, Mr Booth was pulled in by the sense of community and the opportunity to get a look at the work of other plumbers, to see what they do differently and what equipment they use.

Now he has over 5,000 followers and his reach extends well beyond just a few photos of his installations.

Mr Booth is now involved in promoting gas safety to the wider industry, standing up for installers across the country and encouraging young people to get into the trades.

He said: “I remember when I hit 500 followers and I thought that was massive, and it’s just grown and grown. I always follow back if the person that follows me is in the trade, because I love seeing what other people are doing and I love interacting with other people. It’s like a big bunch of mates.”

Recently, he was impressed by the quality of work he saw from Den Hollingworth of Hollingworth Heating (@doitlikedenbo on Twitter), and bought a bag of wire wool after seeing how good Mr Hollingworth’s pipework looked, in order to polish his own in the same way.

Mr Booth says social media is great for seeing the standard of other people’s work and improving your own as a result.

He said: “I normally only get to see my own work or, if I’m going to repair something, a job that may not have been done to a great standard.”

One of his main focuses recently has been working for the good of installers across the country, whether this is banding together to make opinions known about new schemes or opportunities, or to promote important work like his involvement in Gas Safety Superheroes, a not for profit campaign designed to improve awareness, training, energy efficiency and workmanship within the gas industry.

“The part I came up with [for Gas Safety Superheroes] was the hashtag #regardthecard because, since I became Gas Safe-registered 15 years ago, I can count on one hand the amount of times people have asked to see my card on jobs.

“The biggest problem with gas is people doing it that aren’t qualified. If everyone is aware that they should ask for the card before they do any work then that’s got to be bad for the cowboys.”

Though Mr Booth is humble about his social media presence, he puts considerable effort into using it to represent other plumbers and draw attention to products and issues that he believes are important.

One such example was his use of Twitter to encourage manufacturers to implement a callback system for technical calls. After an overwhelming poll with 93% in favour, manufacturers including Viessmann and Baxi agreed to implement callbacks with immediate effect.

Mr Booth said: “If you’re doing a good job and you’re proud of your work, then you should want to put it on a platform – be it Twitter, Facebook, Instagram etc. I think that’s how people are going to start getting more work, by how they advertise on social media.

“A lot of it used to be word of mouth but these days most people don’t talk to their neighbours, they just find everything online.

“If you’ve got an online presence, that’s going to help you get your name around and get noticed.”