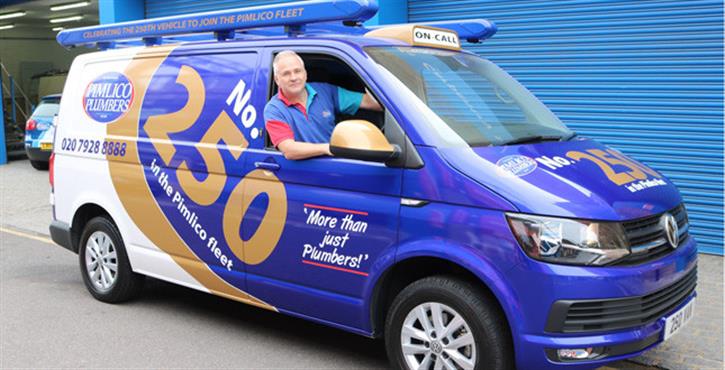 Pimlico Plumbers has continued its rapid expansion by growing its vehicle fleet to support its recruitment drive for experienced engineers.

Having recruited 50 tradespeople in the last three months, the company has invested almost £500,000 in new vans to service its expanding client base across Central and Greater London.

The acquisition of the new VW Transporter vans has seen the company achieve the milestone of having 250 of its red, white and blue vehicles on London’s streets.

The vans, many of which sport plumbing-related number plates including ‘BOG1’, ‘LOO20LD’ and ‘S1NK’, have become an iconic fixture in the capital with Londoners often sharing pictures of their favourite Pimlico vans and number plates on social media.

Pimlico’s 250th van will be an even more unique sight as it features special livery celebrating the milestone and the number plate ‘VAN 250’. It will be used by one of Pimlico’s most-experienced engineers, Craig Bly who passes his current vehicle to one of the company’s latest recruits.

Pimlico, which provides a range of home services, from plumbing and heating to electrics, drainage, carpentry, appliance repair and small building works, now has a record workforce of 358 made up of engineers and a support team based at its headquarters in Lambeth.

Its Sail Street HQ is also expanding to cope with the company’s increased headcount with a multi-million construction and expansion programme underway, which will include the addition of an extra storey on to the 30,000 sq ft building.

Charlie Mullins, founder and CEO of Pimlico Plumbers, said: “Our 250th van is a huge milestone for the company, and, after having her bespoke Pimlico electronics added, custom racks and our famous 'on call' sign installed, she’s now ready to hit the streets of London in full plumbing action.

“The momentum we’ve built over the last decade has been remarkable, and as a whole, the company is expanding at a substantial rate”