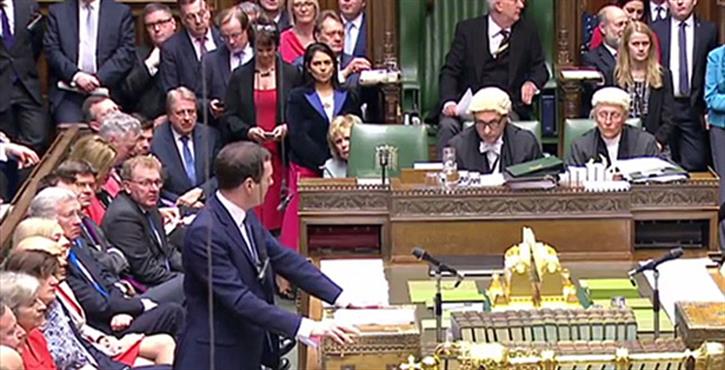 Chancellor George Osborne today (16 March) set out the 2016 Budget amid what he described as a “turbulent” global economic outlook.

Mr Osborne set out a number of tax changes for business and enterprise, as well as commitments to infrastructure and pledges to help young people save for the future, in a Budget he said would put the UK’s economic stability first.

He said these investments would help the UK to enable real social mobility, with the government redoubling its efforts to “make the UK fit for the future”.

The Office for Budget Responsibility (OBR), which makes many of the financial and economic forecasts for the UK in preparation for the Budget, said that the global economic outlook was materially weaker, but that it could still forecast UK economic growth for each remaining year in this Parliament, despite slower growth in China and weak growth being seen across the developed world.

As such, the OBR has revised UK productivity growth down from its previous forecasts, though Mr Osborne said this revision was “a highly uncertain judgement call”. The International Monetary Fund has been equally cautious, stating that the global economy still faces a risk of derailment.

Mr Osborne did note that the OBR forecasts have been made on the assumption that the UK will remain in the EU following the referendum in June. While the OBR is politically neutral, Mr Osborne reported that OBR said “a vote to leave could usher in an extended period of uncertainty that could have negative implications on business and consumer confidence”, while the precise details of the UK’s exit of the EU were worked out.

OBR figures show that business has created 150,000 more jobs in the past four months than it had previously forecast, with employment levels now standing at their highest ever and, correspondingly, the lowest number of people claiming out of work benefits since 1974. Mr Osborne said one million more jobs are expected to be created over the rest of this Parliament.

The UK is still on course to achieve its budget surplus targets, according to Mr Osborne, with forecasts suggesting it will achieve a £10.4bn budget surplus by 2019/20. However, to achieve this, Mr Osborne announced a further £3.5bn reduction in public spending must be carried out by 2020.

The Small Business Rate Relief threshold will rise from its current £6,000 level to £15,000 for the smallest businesses, with the threshold for the higher rate rising from £18,000 to £51,000. Mr Osborne said this meant 600,000 small businesses would pay no business rates at all from next year, with another 250,000 seeing rates being cut.

He had also commissioned the Office of Tax Simplification to look at new ways to make the tax system work better for smaller firms.

Following the domestic property Stamp Duty reforms last year, Mr Osborne said the government will now introduce a similar system for commercial properties. This means any commercial property which is sold will now have a 0% stamp duty rate up to a value of £150,000, then a 2% rate on the next £100,000, and a 5% top rate for everything above £250,000. These changes will come into effect from midnight tonight (16th March).

There will also be a new 2% rate for high value leases with a net present value above £5 million.

Plans have also been announced to abolish the Carbon Reduction Commitment completely, and instead to increase the rate of the Climate Change Levy from 2019, though Mr Osborne stopped short of saying what that rate increase will be.

From 2018, Class 2 National Insurance will be abolished altogether, providing an estimated £130 annual saving for the self-employed.

To try and help encourage young people to save for their future, Mr Osborne announced a new flexible Lifetime ISA will be created from April next year. Anyone under the age of 40 can invest up to £4,000 per year, and the government will add £1 for every £4 saved, meaning the potential of £1,000 per year being contributed by the government. This can be done every year until the saver reaches the age of 50, with the money either being used towards the purchase of a first home, or to go towards a pension.

For the oil and gas sector, which has been badly hit by the dramatic fall in oil prices, Mr Osborne said he could cut the supplementary charge on oil and gas from 20% to 10%, as well as abolishing Petroleum Revenue Tax. These changes will be backdated to 1 January, 2016.

Mr Osborne also announced a halving of the price of the tolls on the Severn Crossing from 2018.

Mr Osborne said he would be setting out measures to speed up the planning system and zone housing development, with the details being announced in due course. He also pledged to support community housing trusts, with a £20 million fund to help young families onto the housing ladder in the south west of England.

He also announced a £115 million support package for those who are homeless and to reduce rough sleeping.

There will be upgrades to the A66 and A69 roads, and a four-lane expansion of the M62. Crossrail 2 will now be commissioned, as well as upgrading train lines in the south west of England, and crossings in Ipswich and Lowestoft.

Addressing the need for more money to be invested in flood defences, Mr Osborne said he would increase the standard rate of Insurance Premium Tax by 0.5%, with all the extra money raised being committed to a £700 million boost to flood defences. Initially, schemes across York, Leeds, Calder Valley, Carlisle and Cumbria will be given the go-ahead, with more reviews to determine where else the money should be spent.

Mr Osborne announced that the planned rise in fuel duty this year would be cancelled, freezing fuel duty for the sixth year running. This, he said, would be the equivalent of a £270 annual saving for the average small business with a van.

Tobacco duty will rise by 2% above inflation from 6pm tonight, with hand-rolling tobacco duty rising by an additional 3%,

Beer duty is being frozen, as the duty on cider, Scotch whisky and other spirits. All other alcohol duties will rise by inflation as planned.