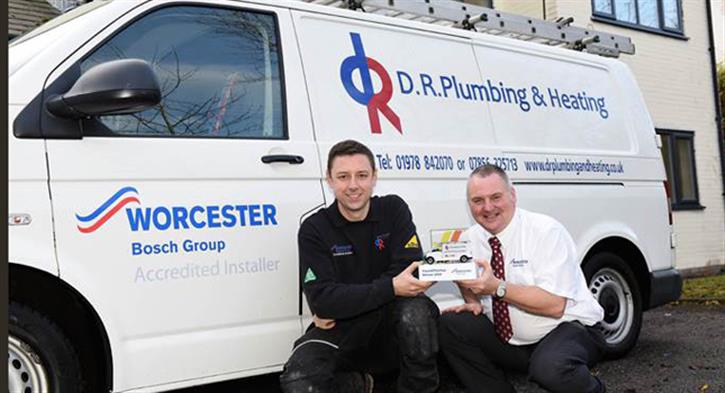 Wrexham-based heating engineers, DR Plumbing and Heating, have been crowned the winners of Worcester, Bosch Group’s first ever #VanOfTheYear competition.

After a shortlist of five vans was drawn up from Worcester’s 2016 monthly winners, the contest saw nearly 1,000 people take to social media to vote for their favourite installer van.

The competition generated a huge amount of buzz within the installer community, even sparking celebrity engagement and a tense sing-off on Twitter.

“Our van is one of our most important tools – as well as getting us from A to B, it’s the first thing our customers see when we pull up at their house,” said Mr Roberts. “We really enjoyed taking part in this year’s competition and are we were thrilled with the support we got from members of the heating community. There was a real buzz surrounding the contest and it is fantastic to be crowned the overall winner.”

Martyn Bridges, Worcester’s director of marketing and technical support, added: “We know how important a van is to an installer’s business, and the incredible level of interaction we saw just shows how engaged heating engineers are with all aspects of their industry. Our congratulations to DR Plumbing on their win, and our thanks go to everybody who carried out the closely-run competition in such spirits.”

Following the popularity of the competition, Worcester will be running #InstallOfTheMonth throughout 2017. For more information, visit Worcester’s trade social media channels.