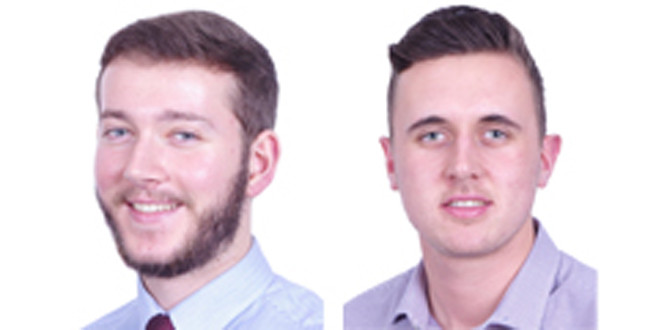 Pump and pumping system manufacturer Wilo has appointed two new merchandisers to provide support for merchants and their customers up and down the country.

Brad Finch from Bedmond, near Watford has joined to look after the south of the UK. He has more than three year’s experience in the plumbing and heating sector working for BSS Pipeline and Kamco in a variety of sales related roles. A sports enthusiast, he plays cricket and football to a high standard, having played for his home county cricket side – Hertfordshire – in minor counties cricket and spent a season playing cricket in Australia for Brighton Cricket Club – the second oldest team in Australia having been formed way back in 1842.

Dom Wright from Richmond in North Yorkshire has joined Wilo to cover the north of England and Scotland. He started a university degree but quickly decided he preferred the world of work and joined Schiedel Chimney systems as Merchant Area Sales Manager in the south of England and Wales. In 2014 he volunteered to carry out community work in one of the most impoverished areas of Equador in South America and whilst there took an Open water Diving course.

The two lads will become well known faces at merchant branches up and down the country in the months ahead: “These are exciting times for the Wilo business and we’re pleased to have Dom and Brad on board to help us build the Wilo brand still further and to be on hand to provide the support that merchants value from manufacturers,” says Wilo’s Marketing Manager Morgan Warren-Ross.