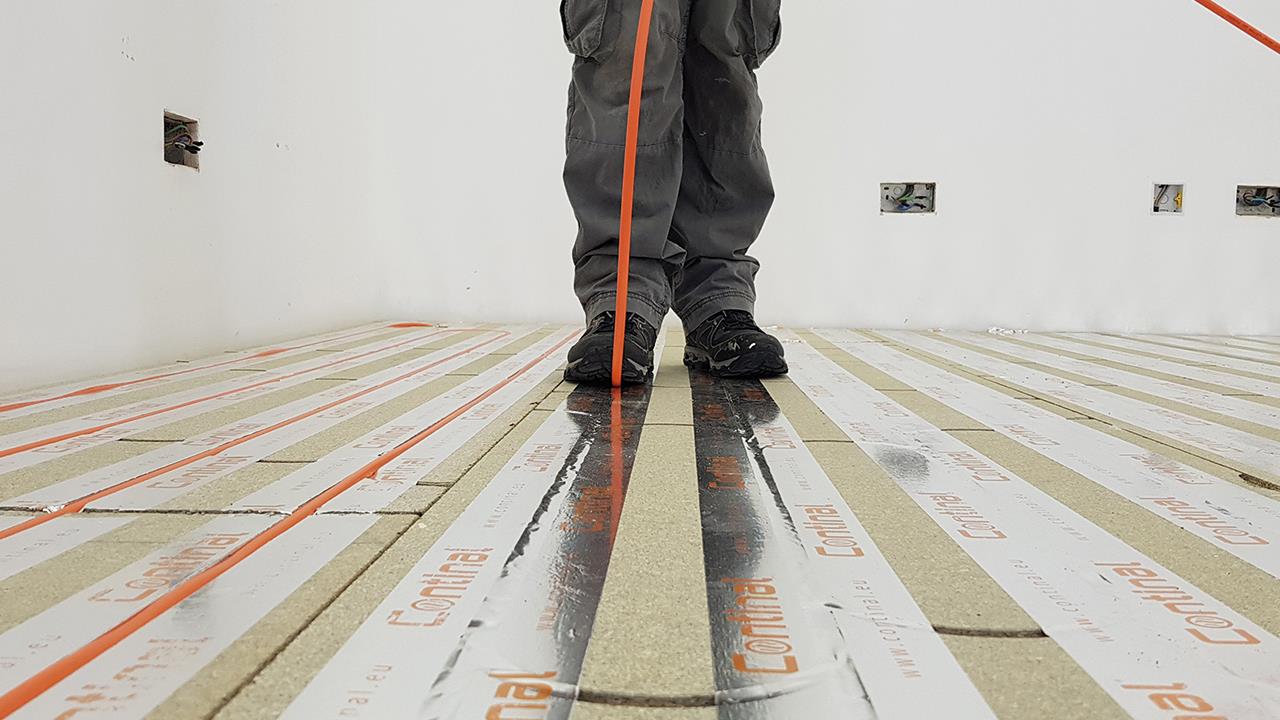 Chris Ingram, founder of Continal Underfloor Heating, explains why underfloor heating outperforms other heating emitters when it comes to efficiency.

Underfloor heating (UFH) has long been known to be the most efficient type of heat emitter, but many people don’t know the science that makes this the case. At a very basic level, there are three types of heat transfer – convection, conduction, and radiation.

Convection is the transfer of heat through air particles, which move more quickly as they heat up, causing them to become less dense and rise. Take a lighter, for example – if you light it and place your hand above the flame, you can feel the warm air rising due to convection.

Conduction takes place when heat is conducted from the warm end of something to the cold end. Conduction heat transfer can only take place between objects that are in direct contact with each other, with metals being particularly good conductors of heat energy.

Finally, radiated heat travels in the form of waves, rather than air particles, with energy transferring from bodies of high temperature to a body of low temperature without having to be in direct contact with each other. So, taking the example of the lighter again, if you put your hand to the side of the flame, below the convection currents, it will still feel warm.

Radiant heat acts similarly to a light source, which is why if you stand outside on a sunny day, you feel warmer standing in the direct sunlight than you do if you stand in the shade. That’s radiant heat, and it requires less energy than convection to affect a feeling of comfort.

Different heat emitters emit different proportions of these heat types. Although the name ‘radiator’ suggests that they would be mostly radiant heat, this is actually a misnomer. In fact, radiators are 70% convected heat, and only 30% radiant heat, while UFH is 60% radiant and 40% convected.

The fact that UFH consists of more radiant heat means that its heat transfer is much more even throughout the room, while the heat energy from radiators rises first to the top of the room. This is why rooms heated with radiators can often feel stuffy at the top, but colder nearer the floor.

People feel most comfortable with an even distribution of heat throughout the room – we don’t want it hot by our head, and colder down by our feet. Instead, you want the temperature to be around 18-19°C by your head, slightly warmer down by your feet, and you don’t want to be wasting heat by heating the ceiling before the occupants.

The heat profile created when using UFH as a heat emitter is extremely close to the ideal heat profile of a room; this is one of the key reasons why UFH is most efficient. UFH heats you as you need to be heated, and so keeps you far more comfortable, making it much less likely that you will turn the heating up to try and get that feeling of warmth throughout your whole body, rather than just at your head.

So, UFH is the most efficient type of heat emitter, but lots of people also ask which type of UFH is most efficient – electric or warm water systems.

Basically, there is a simply 30% rule – electric heating is 30% less efficient to heat the same space as radiators, but warm water UFH is 30% more efficient than radiators, because it heats by using the radiant component and can run at a much lower flow temperature than a radiator-led system.

While radiators typically run at between 65-70°C, UFH is limited to a maximum of 50°C (or lower) so, when used with a low-temperature heat source such as a heat pump, can achieve flow temperatures as low as 35°C, enabling the heat pump to operate at its most efficient.

To maximise these efficiencies, however, it’s important to make sure you design the whole system to be as efficient as possible. That means tightening up the pipe spacing for low-temperature systems.

A high-temperature heating system, such as a boiler, can have wider pipe spacings because the pipes emit a lot of heat but, for low-temperature systems, the pipes need to be closer together. Twenty years ago, the standard was 250mm spacing in a screed floor, with the homes insulated to the typical standards of the time.

These days, despite better insulation levels, and because heating systems now run at much lower temperatures, we would usually recommend 150mm pipe spacings in a screed system, or less. Pipe spacing isn’t simple though, it needs to be calculated by proper design. Just chucking pipe in as close as possible is no different to the lazy practice of fitting a larger radiator or up-sizing a boiler because ‘no one ever complained of being too hot’.

As well as choosing the right system, there are other choices that have to be made while designing the system that can have a huge impact on the final efficiency levels.  Firstly, take the time to really consider where you want the controls to be in the house. Never place the thermostat against an external wall, in direct sunlight, or in a draught, otherwise it won’t accurately monitor the temperature in the room and this will lower the efficiency levels.

The other vital design consideration is to ensure the UFH has the right levels of insulation to make sure all the heat generated is directed where you want it, and doesn’t disappear into the screed floor or between the joists, where the heat would be lost.

We are seeing worrying reports of manufacturers claiming you can fit an overfloor UFH system which has sufficient insulation just built into the pipe fitting system, but this is simply not true.

We would always recommend a minimum 50-150mm of insulation is fitted either below the pipe fitting, or in the subfloor below. Without this, the losses can be as high as 40%, but more typically 20-30%; much higher than the 8-10% claimed by panel salesmen who haven’t been trained in heat loss.

These are the key things to bear in mind when you’re designing or specifying an UFH heating system. But, if you need additional advice, it’s always best to contact a manufacturer, who will be able to talk you through the different options and ensure you create the most efficient system possible.

EFFICIENCY HEATING RADIATORS UFH UNDERFLOOR HEATING
Tweets by HVP
Make sure you’re on top of changes in the industry, and sign up for free to receive your monthly copy of HVP and our weekly email newsletter
SUBSCRIBE TO NEWSLETTER
SUBSCRIBE TO MAGAZINE