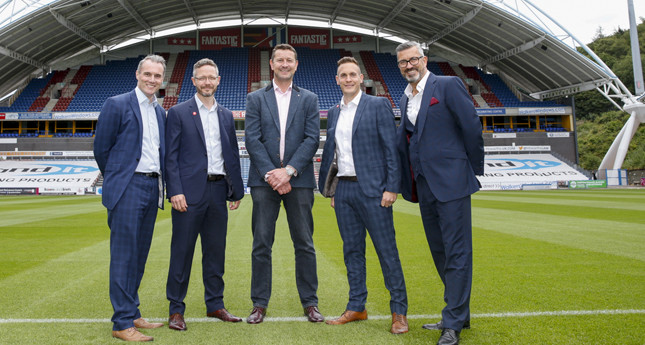 Viessmann has extended and increased its sponsorship of Huddersfield Town Football Club for the 2017/18 season.

As the official heating partner to the club, the German heating manufacturer will continue as team sheet sponsor and become exclusive title sponsor of 'Club Town', a new area of 64 executive heated seats situated behind both home and away dugouts. Viessmann branding will appear on the heated seats, in the matchday programme, on pitch-side display boards, on the team sheets themselves and via social media.

"Building on a successful partnership in the 2016/17 season – which saw us stage our first 'Vriendly' football match between German and English heating installers in April – Viessmann is delighted to be part of Huddersfield Town's rise to the Premier League, after a gap of 45 years," said Graham Russell, Managing Director at Viessmann.

"What started as a low-key partnership, led by our sales manager in the Yorkshire area, quickly caught the attention of Viessmann headquarters in the UK and Germany and we are proud to extend our presence and identity at the John Smith's stadium and among the fans. It is fitting that Huddersfield Town is the most German football club outside Germany – with many players, and both the head coach and assistant head coach from Germany!"

Huddersfield Town's Commercial Director, Sean Jarvis, added: "Everyone at the Club is delighted to welcome Viessmann as a global partner for the 2017/18 Premier League season.

"The Club's commercial team puts great emphasis on brokering bespoke relationships with each of its partners to ensure that they get the maximum return for their investment. I believe that Viessmann's commitment is proof that a relationship with Huddersfield Town can be of great benefit. The team at Viessmann has been among the best at making the most of its sponsorship so far and we look forward to working with the team there to mutual benefit throughout the coming campaign."

Viessmann partners, installers and customers can expect to hear and see more about Viessmann's involvement with Huddersfield Town throughout the season and can keep up-to-date via the @ViessmannUK Twitter and Facebook pages.