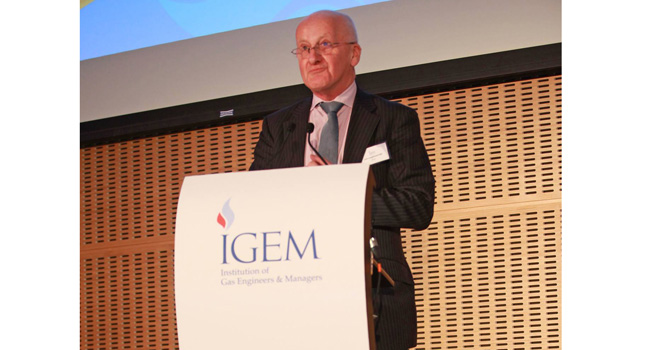 Gas is central to the future of a value-for-money energy market that can meet 2050 emission reduction targets, energy industry figures at the Annual Conference and Engineering Update, have been told.

The annual event is organised by the Institution of Gas Engineers and Managers (IGEM), the chartered body representing the gas industry. This year’s was held at the Hilton at St George’s Park, Burton upon Trent, on 22 and 23 September.

Keynote speaker, Professor John Loughhead, Department of Energy and Climate Change (DECC) Chief Scientific Advisor, opened the conference by stating that gas had an incredibly important role not only in the UK, but internationally as well.

“The key is how to use it to achieve our carbon targets; what are the possibilities for CNG vehicles, hydrogen and the impact of carbon capture and storage (CCS)? Gas is central to the future,” he said.

“It’s become apparent that there is far more natural gas in the world than we previously thought. The question is really, what can be done in the short and medium term with this magical stuff?”

Bringing together pre-eminent voices in the discussion over the UK’s energy future, the conference focused on sustainable solutions to help the country meet its carbon cutting targets.

Professor Loughhead’s comments shared similarities with those made by Energy Secretary Amber Rudd at a recent House of Commons reception.

She said: “Gas and the national gas grid will remain important for many decades to come.

“I’m excited by the possibilities, at the innovations in the gas networks, the projects which are already ongoing.”

Presentations focused on the sustainability of natural gas and how it can play a role in a low carbon economy. They were made by public and private organisations including the Department of Energy and Climate Change (DECC), Ofgem, HSE, DNV GL, the University of Oxford, KPMG, Carbon Connect, National Grid, SGN, Northern Gas Networks, Wales & West Utilities, and the Natural Gas Vehicles Network.

SGN’s experiments in gas quality in the Scottish town of Oban are said to have possibly revolutionary consequences for European gas markets, while some industry figures suggest the National Grid’s research into bio-syngas has the potential to create a whole new sector within the industry.

Wales & West Utilities presented their research into the available options for replacing gas boilers and consumers’ willingness to pay for alternative forms of heating.

Northern Gas Networks talked about the options open to the UK for injecting hydrogen into the network.

IGEM president Chris Clarke said: “Gas should be an essential component in a low carbon, value for money energy market - and continue to be a key feature of future energy policy.

“Previous thinking was that removing gas from the energy mix – particularly for heating homes – would help the UK meet our decarbonisation targets. However, research shows that the consumer must be placed at the heart of any policy decisions.

“Only a balanced energy approach can help us meet the challenges of the future and solve the energy trilemma of maintaining security of supply whilst meeting our carbon emission targets at an affordable cost.”

Sarb Bajwa, IGEM chief executive officer, added: “As our conference has shown, the gas industry is ready to play its part in decarbonising the UK – whether by maximising opportunities in green gas, blending other sources such as hydrogen, the use of natural gas vehicles or through carbon capture and storage.

“The possibilities for our industry are endless and, as the cleanest fossil fuel, we are prepared to take on the challenge.”

Photographs from the conference can be viewed by visiting IGEM's Facebook page.