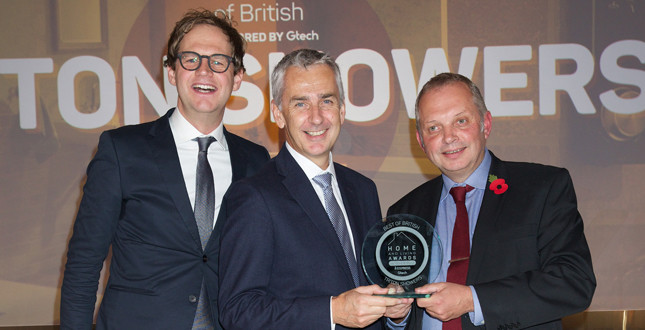 Triton has scooped two honours at the inaugural Express Home and Living Awards.

Triton joined the biggest and brightest names in homes and gardens who attended the star studded celebration held in London’s West End. At the event, Managing Director David Tutton took to the stage to receive both the Best of British and Best Bathroom Supplier trophies.

For the Best Bathroom Supplier group, the experts assessed a broad range of products and business attributes, including after-sales support. Triton was selected as the front runner thanks to its excellent customer service and launch of the HOST digital mixer shower.

The panel then commended Triton with the Best of British category, in which they sought ‘red-letter day design’, ‘white-hot creativity’ and ‘blue-sky thinking’. The award received recognised Triton’s long standing 42-year heritage, in addition to its ongoing commitment to designing, developing and manufacturing world class products, such as HOST, for British homes.

The Express award victories swiftly follows Triton’s six figure investment in a total rebranding of the business. The national ‘See you first thing Britain’ campaign and TV commercial launched this autumn together with HOST. This bold move put Triton ahead of the competition once again as it became the first UK shower company to embark upon this level of activity.

David said: “This year has been particularly exciting for Triton and this latest news really is the cherry on top! I was absolutely thrilled that Triton was not only nominated for, but then went on to win, two incredible accolades ahead of a wide range of industry leading businesses.

“On behalf of everyone at Triton, I would like to congratulate all the winners and look forward to celebrating with our 350-strong ‘Team Triton’ who are fundamental to our continued success.”