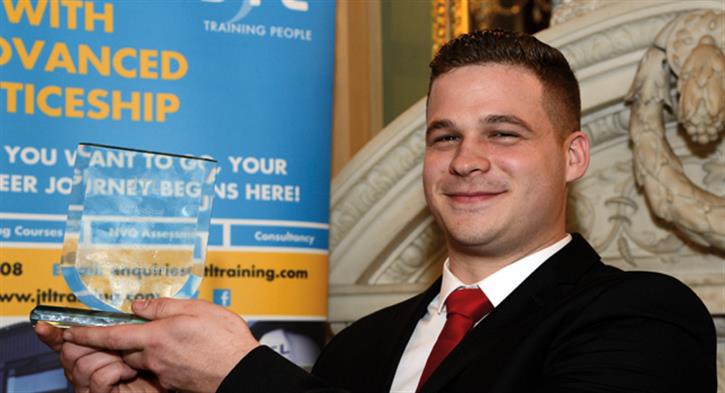 Held at Drapers’ Hall in London, the annual awards recognise the hard work and achievements of the best in the building services sector.

Mr Ransom, who works with Dartford-based Kent Eco Homes, excelled at every stage, proving himself to be a competent student from day one, even completing his apprenticeship ahead of schedule.

“I was so shocked to hear the news – I genuinely wasn’t expecting it!” said Mr Ransom. "I learnt so much on my apprenticeship. I'd expected to master the practical skills but I hadn't anticipated learning so much in other areas too. I've learnt how to deal with all different types of people - a skill that's equally useful out of work as during the working day. It's been a great experience and one that I'd repeat in a heartbeat."

Having completed his apprenticeship in August 2014, James now works across a wide range of plumbing and heating projects, mainly in London and the South East.

His boss at Kent Eco Homes, Mark Tighe, added: "James is a hardworking and capable engineer, whom we initially selected because of the positive attitude he showed - an approach that has stayed with him throughout his apprenticeship. He's eager to learn, takes direction well and uses his initiative when required. He is also very adaptable, proving his ability to work across a variety of projects. Winning JTL's award is a fantastic achievement and everyone here at Kent Eco Homes wishes James continued success in his career."

All the nominees at the London final were winners in their regions. The candidates, who were nominated by their JTL training officers thanks to their exceptional classroom work, outstanding practical abilities and excellent employer feedback, also attended formal interviews with JTL's senior management team.

“James’ knowledge of his craft was beyond any I have seen over the last 10 years. Not only that, he’s also a really likeable young person who, without a doubt, will be a very successful heating and plumbing engineer. It was a real pleasure to watch him progress through his apprenticeship,” added Mr Ransom’s JTL training officer, Mark Brown.

Industry and government approved training supplier, JTL, delivers apprenticeships in partnership with colleges and workplaces across seven regions in the UK. The not-for-profit organisation has around 6,000 young people on apprenticeship schemes at any one time.